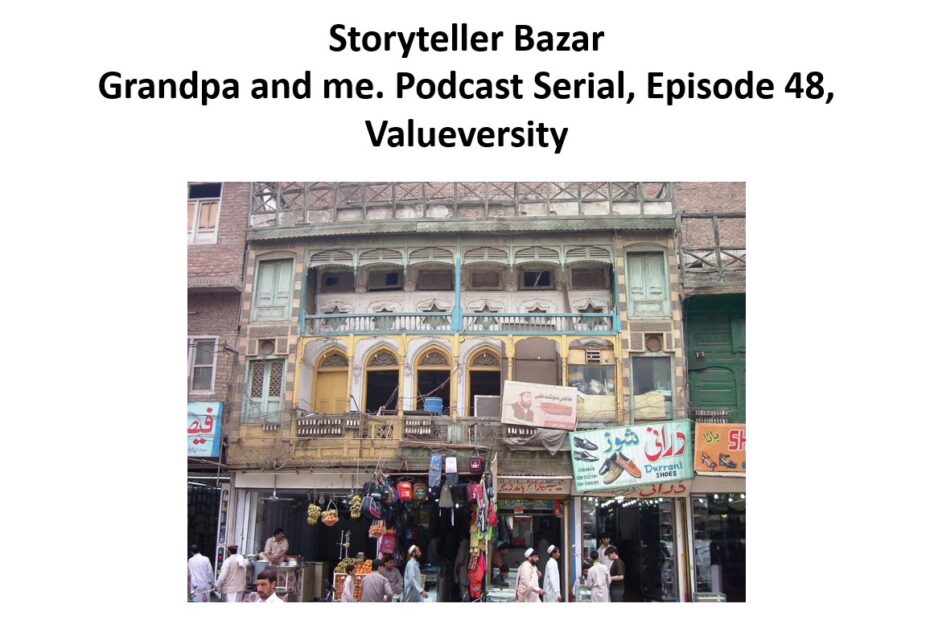 Two months had passed since the 2005 earthquake in Kashmir. We arrived at the Abbottabad Guest House. After a detailed visit to Azad Kashmir accompanied by Colonel Khan. We saw debris piles, cracks in the roads, Muzaffarabad Hospital’s crumbling building. The tent hospitals were filled with injured and disabled patients. We completed the report for the donors meeting by late at night. We rested for a few hours and left for Peshawar early in the morning. Because of the expert driver, we arrived long before the meeting. We decided to have breakfast in the famous Qissa Khwani (Storytellers) Bazar. It was a shock for the romantic concept we had in our minds. There was neither caravan nor inn. Nor do travellers and traders sitting around the fireplace. No one was telling stories of distant places. An ordinary marketplace with day to day hustle and bustle. Customer throngs and traffic noise. But the Kulcha breakfast with strong tea was out of this world. Colonel Khan told me. Peshawar, also called the city of flowers, was once a city of Hindko speaking tribes called Pishorees. Later, Pashto-speaking Afghan and independent tribal area Pashtoon also came along and settled. It is the oldest city in Central and South Asia. In the second century AD, travellers of the Kanishka civilization used to stay in its taverns. They brought news and stories from different parts of the world. They used to sit around a bonfire in a circle and told and listened to stories with tea in their hands. I said. The first human story is older than this market. Who knows in which cave did one of the early nomad hunters justified his failed hunt by telling a story? It might be a motivational story to allay the fear before a dangerous hunting mission. An optimistic story in the hope for success. As civilization progressed, the storyteller gained power and respect. Before the invention of writing, the only way to learn was to tell and listen to the story. Those who told the story of the mysteries of the universe and the afterlife became priests. People and stories began to travel. According to Intezar Hussain, the stories became gipsies. Few stories returned home after a long transformational journey. How illuminated Qissa Khwani (storytelling) Bazar would be in those days. When bright lights of wisdom, distant and generational experiences used to shine here. There is no doubt stories have supported mankind during tragedies and incomprehensible traumas. Many stories must have provided easy answers. Not true explanations for storms, earthquakes, lightning and starry night. There must be exaggeration about the greatness of ancestors and unseen gods. Khan replied. Even today stories are surrounding us. Film, drama, poetry, news, painting, and religions of the others are stories for us. Politics, medicine, law, literature, business — none of these fields can survive without stories. I put the cup on the table and said. God knows how many unknown people have held the hand of these stories over here. Those startling, tickling, moistening the eyes kind of stories. The style, voice and tone of the storytellers must have mesmerized so many listeners. Khan picked up the last piece of Kulch and spoke. The remarkable story of this Bazar is the non-violent sacrifice for independence. Under the leadership of Bacha Khan. There was peaceful procession underway for Indian independence. British imperialist forces in armoured vehicles attacked the innocent crowd. They aimed and fired bullets. The Official statement says twenty people died. But the locals say, they killed about four hundred volunteers (Khudai Khidmatgars). This decisive moment of the independence movement is the noblest story of this Bazaar… To be continued