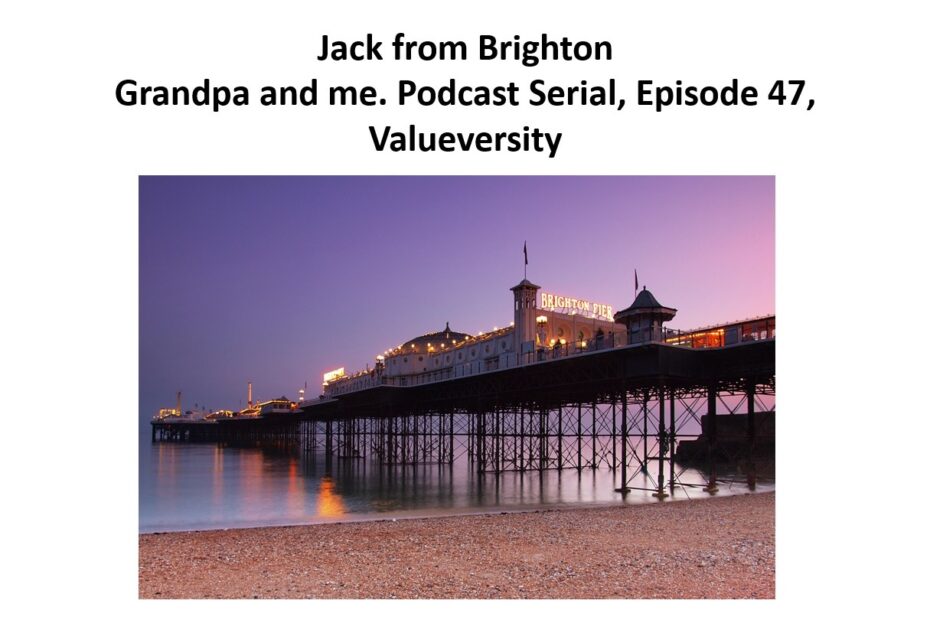 I and Jack were sitting on the pebble beach and watching the waves coming and leaving. In front of us was the open sea. On our left was the eighteen hundred feet high building of Brighton Pier. Grandpa was talking about his last meeting with his friend Jack. He continued. Jack told me that this pier was completed in 1899. The city’s iconic clock tower had already been built ten years ago on Queen Victoria’s birthday. Brighton is a city of restaurants. A restaurant for every four hundred people. Eat-in a new restaurant every night, even if it takes a year. Churchill studied in the same city. Surveyor George Everest, Mount Everest was named after him. Is buried here in the cemetery of St. Andrews. When we finished the ice cream while sitting on the pebble beach, we stood up for a stroll. While we were walking on the beach, on our right was the busy seafront road bustling with traffic. On the other side of the seafront road, there are many luxury hotels and restaurants. In a few moments of silence, Jack’s life went on like a film in my mind. Now sixty-eight-year-old Jack was born in the same city to a poor mother who cleans train bogies. He does not remember his Father’s face. Continuous smoking soon killed his mother as well. He spent his childhood with poor aunts and government help. But his childhood mischievous never stopped. One day he and his friend Anne jumped from a fallen branch of a tall tree to the roof of the church. But they did not have the clue how to come down. When they shouted for help, people called the fire brigade. They were first rescued followed by smacking. For some unknown reason, Jack had a passion for education. With the help of government scholarships and the attention of grammar schoolteachers. First, he qualified as a doctor. Then he became a Trauma Surgeon. Finally, he achieved Hunterian professorship at the world-renowned Royal College of Surgeons. At the age of seventeen, he made a vow to sixteen-year-old Ann. It is still in place as half a century successful marriage. Then Jack told me the story of Brighton. It started as a small fishing village near the coast in the fifth century. In the Saxon era, many farmers also settled here. Fishermen settled near the coast at the foot of the hill. Farmers settled on the other side in the fertile valley and plain. In 1313 AD it became a market town when the residents got legal rights. There is mention of the fish market and the annual fair in ancient books. In the fifteenth century, when French forces invaded the town. The torches were lit on the hilltops. People from far and wide came to the rescue. The attackers had to flee. At the beginning of the eighteenth century, a severe storm wreaked havoc. Only fifteen hundred people remained in the town. Dr Russell wrote a book in 1753 on the benefits of bathing in the sea. When the Prince of Wales came regularly to bathe with his friends, many rich people also built houses here. With the construction of buildings and markets, modern city impressions emerged. As we talked, Jack and I climbed the stairs and crossed the front street. We then reached the lobby of the Kings Hotel where we were staying. Brighton’s orphaned Jack is now the head of a global charitable organization. His organization provides help to deprived people without discrimination of religion and race. From rebuilding Pakistan’s earthquake-ravaged village to providing medicine to Gaza hospitals. And educating South American orphans. Brighton’s Jack is overwhelmed by his tireless passion for serving humanity… To be continued