Country of poets, Chile. Episode 46, Grandpa and me, Shariq Ali 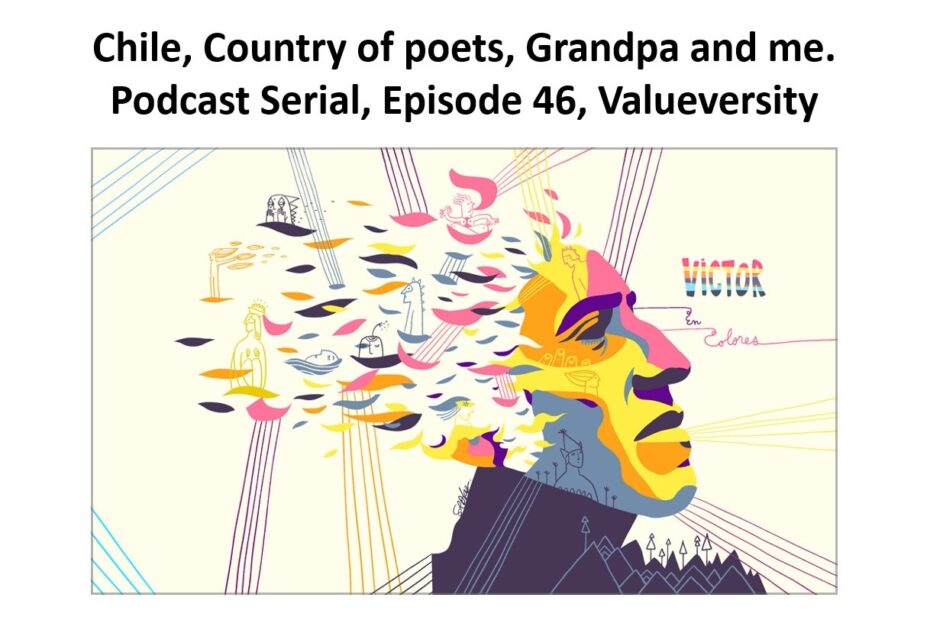 Delegates were sitting on the chairs in a circle. A large bouquet of fresh flowers was lying in the middle on the central table. Uncle Patel was referring to the Toronto Conference. He said. The Desk in front of each chair had a microphone. There was a display card showing the name of the country in front of each delegate. Catalina was sitting beside me. The sombre expression on the face, but a childish smile. She was from Chile. All participants agreed. Despite the long distances and the diversity of languages and cultures. The problems of developing countries are the same. Dictatorship, financial dishonesty, deprivation of education and health facilities for the public. All stories were similar. After the official dinner that night we both sat by the pool for the tea. I asked. Please tell me more about your country. she said. On the map, it looks like a line three thousand miles long and one hundred miles wide alongside Argentina. Lakes, volcanoes, deserts, islands and a population of about 20 million. Santiago Capital and Currency Peso. Indigenous Mapuche comprises only five per cent of the population. The rest is Spanish speaking mixed population. Chile is famous for hundreds of Moai statues carved from volcanic rocks on Easter Island. We Chilean call it the land of poets. It makes a lot of sense because of the Gabriella Mistral Nobel Prize in 1945 and Pablo Neruda’s in 1971. Most of all, both won the hearts of the readers of world literature. Catalina said. Gabriella was not only a poet but also an educator, an active member of the feminist movement and a diplomat. She was born in 1889 and went through poverty when his father passed away in her childhood. When she was fifteen, she did a job in a school as an assistant and also equipped herself with education. She then became a teacher and kept writing poems. First, she achieved regional, then national and finally international fame. The young death of her fiancé gave her poetry an extraordinary sadness. As her academic and literary stature grew, she spent time in Italy and France. Representing Latin America in the League of Nations. Visited many countries, received honorary professorships from universities. She wrote many articles. And build her reputation and name in Spanish literary circles. Her forte was both education and poetry. Then she did diplomatic assignments in Brazil, Spain, Portugal and the United States. Gabriella’s poetry expresses the aspirations and hopes of the common people. Singing stories in Gabriella’s work are familiar with the sorrows of poverty. Dedicated to the love of the oppressed people. This is how she addresses in children’s stories. I am Gabriella. In love with voices and words. Look at the words sliding from my tongue for my thoughts. My stories are flying in the air like butterflies. Gabriella life journey ended in 1957. Then her student Pablo Neruda held the baton of love and ran. Born in 1904, Neruda’s first love was writing poems. He also loved to wander the jungles. River swimming, horseback riding and even reaching nests in tall trees. Inspired by Gabriella at an early age, Neruda wrote poems on a wide variety of topics. Poems on various contrasts and contradictions of life. His love was for the oppressed people. And the pursuit of justice and happiness for them. His poems were partners, allies and helpers of the people’s struggle. He received the Nobel Prize of Literature in 1971 …To be continued