The Secret of Treasure, Grandpa and me, podcast Serial, episode 43, Shariq Ali. Valueversity 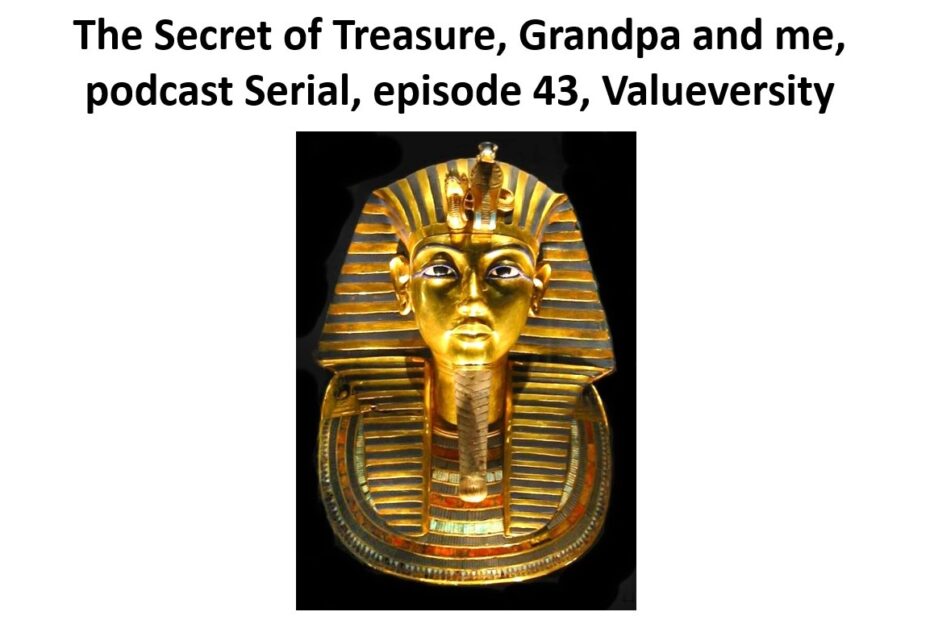 Wearing a grey colour suit with an automatic gun on the side. Dark goggles, military haircut and a walkie-talkie in one hand. The white man was standing in the corridor and was stopping us from using the elevator. When we checked in yesterday, we noticed two bullet-proof vehicles at the hotel main gate. It confirmed the rumour that a key US official was also staying in our hotel. Uncle Patel was recounting his recent trip to Cairo. He said. After about five minutes or so, we used the elevator with his permission. Professor Amar was waiting for me at the reception. When the car left the hotel, I saw Cairo, the city of Egyptian Nobel Prize-winning writer Najib Mahfouz. It was late evening and passing through a city of 20 million people, some areas looked like Karachi. The same traffic chaos. Lots of small roads flooded with cars. Even the interior of the hotel room looked familiar. The same two-pin plug and 220-volt power. Amar told me that modern Cairo was founded by the Fatimids Caliphate in 969 AD. But there are also traces of ancient Islamic, Byzantine, Roman and Pharaonic eras. Then we passed by the ancient seminary Al-Azhar. Our destination was the ferry anchored on the banks of the Nile. The plan was to have dinner by the side of dance and music on a ferry. At the same time, having a two-hour-long cruise along the Nile passing through Cairo. It was dark by the time we entered the ferry. Table reserved for us was the best located for this evening. With the waves of the river Nile, the cruise began. We glanced at the dance and musical performances and enjoyed the food. Cairo’s illuminated buildings were like flickering flames on the surface of the river. And the faint ripples of charming music coming from the background. Selection of delicious food and warm and friendly service was available. The conversation prolonged from the current affairs to the mysteries of the Pharaohs. Amar said. In popularity, Tutankhamen, also known as Tut, is a superstar of the Pharaohs. The world took the news with great surprise in 1922. When British expert, Howard Carter discovered the tomb of Tutankhamen. Full of treasures in the Valley of the Kings. Tut was born in 1342 BC and ascended the throne at the age of nine. He ruled for nine years during the heyday of Egyptian civilization and died at the age of eighteen. The discovery of his tomb after 3,000 years of disappearance has brought him worldwide fame. Glamourous angle was that it was full of treasure. All the treasures of the king’s valley had already been looted. But Tutt’s grave was missed because it was below the workers’ quarters. Carter had seen many artefacts in the valley with the name of the Tut inscribed on them. He believed that the king was also present here. Ay, Tutt’s successor, buried him in a haste. His image inscribed on the wall of the tomb. The accidental discovery of some stairs leads Carter to a tomb full of treasures. It contains hundreds of antiquities and precious gems and everyday items made of gold. Tut supposed to use them in the hereafter. These are now preserved in the Cairo Museum. Tutt’s death is also a mystery. Some experts say it was the result of a severe head injury by some weapon. Some attribute this to a broken leg followed by lethal infection… To be continued