Walking On The Sand. Grandpa & Me. Podcast Serial Episode 24 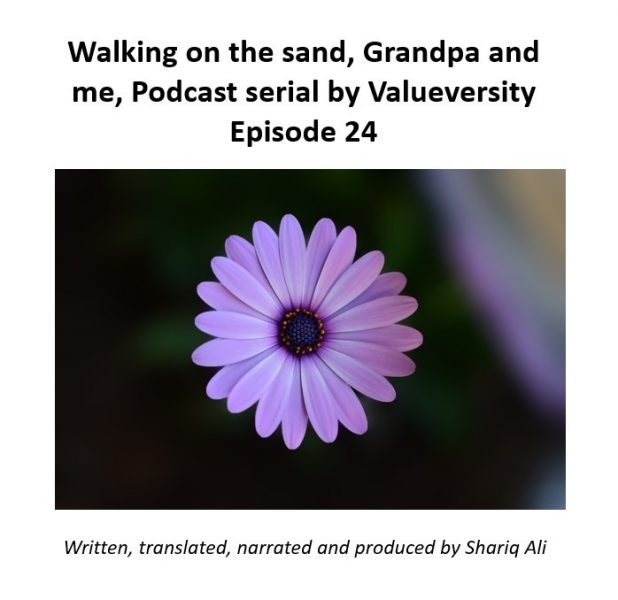 Remembering a poet and a freedom fighter Ahmed Shamim

Room was comfortable and only lit by the fireplace. Grandpa, me and Yani Apa were watching our favourite videos turn by turn on the smart TV. Comments after each video were so amusing. On Yani Apa’s turn, we watched Ahmad Shamim’s poem sang by Nayara Noor. Lyrics and singing were so captivating. ” Once upon a time, we were adorable”. Once the video ended, I said. In this poem, I see the impression of childhood, but travelling on sand is nowhere. Then why its title is Moment of travel on the Sand? Grandpa said. Knowing a poet’s story makes it easier to understand the poem. Let’s begin then. I said. Grandpa said. At the time of partition, Ahmed Shamim was a talented student of Srinagar. He was also an active member of the Kashmir freedom movement. Because of the cruelty of Indian security forces, he had to leave his mother and family and come to Pakistan. First, he served as a freelance journalist in Azad Kashmir Radio. Later, he joined the information department. And promoted to the post of director. His poems never forgot the pain of leaving his mother and Kashmiri childhood. He sacrificed his happiness for the dream of independence. This grief is evident in his poetry. Yani Apa slowed down the heating a little and said. He was living as a paying guest with an elderly landlady in 1950 when he glimpsed Monira. She used to come to learn Qur’an from the landlady. A quiet and reflective girl. He liked her but could not express his feelings. He kept his silence and lost her. He then became a member of the Progressive Movement and suffered state violence. In 1961, by chance, he came across Monira again. This time love defeated the storm of social inequality and economic adversities. Monira writes in the preface of the book “Hava Nam Bar Ho” a compilation of the love letters of Ahmad Shamim to Monira. ” Mall Road was full of people all around us. We were walking along holding each other’s hands. As if we are creating a world of our own. Unbeknownst to anyone around us and the suffering of life. It felt like we had been together for centuries. As if our being and this moment are immortal. We are the universe. He was telling me. I am his dream. A girl who can endure great suffering “. Partition gave him another wound. In 1963, his mother passed away. He could not go back to Srinagar to attend her funeral. He thought strong Pakistan would guarantee the independence of Kashmir. He lost even this hope in 1971 after the fall of East Pakistan. On the night of Dhaka fall, he had his first heart attack. All the sacrifices seemed meaningless. In 1982, on his last interview for the radio, he says. Those who travel on the sand leaves no marks behind them. No clue for the coming generations. The strong winds erase even the footprints. And it becomes a meaningless journey to the unknown. His poem moment of the journey on the sand has many facets. These include a lost childhood, the grief of losing a mother. Broken dreams, and the meaningless struggle for the destination unknown. He laments his entire life in this poem. In 1982, another heart attack proved fatal… To be continued