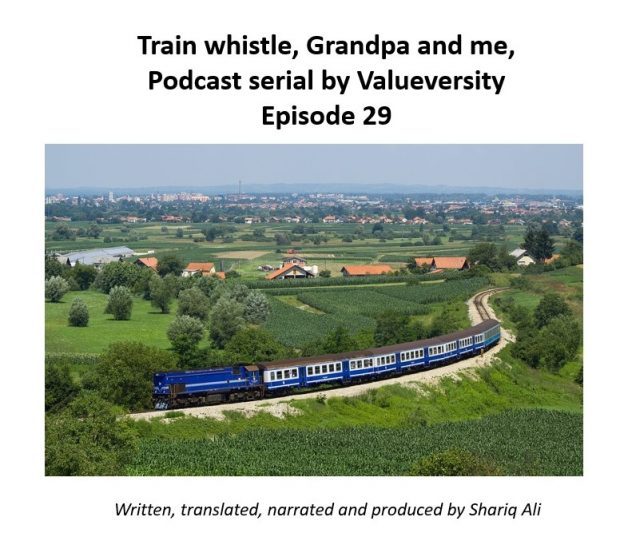 The train came out of the small tunnel. Curved around and crossed the bridge over the river. And then finally stopped at the Phoolbun station. We were sitting on a grassy patch under an apple tree. The location was so high that we could see most of the valley. We left the home early morning to take this hike on the slopes of Koh Ramz. When uncle saw Grandpa is getting short of breath, he decided that we all should take some rest for a while. Yani Apa said. The whistle of a train is a mixed emotion melody. Meeting and greeting, saying goodbye, the beginning and the end. It’s a symphony of human emotions. Uncle said. My childhood memory about the train journey is very colourful. White uniform of the guard. The red jacket of the porter. Multicoloured passengers’ flurry on the platform. This also includes the sound of a train whistle and accelerating wheels. And the unforgettable appetizing smell of the packed meals we used to carry with us. Grandpa smiled and looked at the train tracks and said. The train started on public transport in 1821. The preparation to launch the project continued for four years. The first train journey was between Stockton and Darlington in 1825. It was a revolution for the world. This miracle also arrived in the subcontinent. The British wanted to strengthen the economic, political and military grip. And Kolkata and Bombay businessman, promotion of their trade. Dwarka Nath, who was the grandfather of Tagore, invested in train service from Kolkata. The first regular train service began between Bombay and Thane in 1853. Yani Apa picked an unripe apple from the tree and said. Alas, I could leave the exam worry and ride the train from Siliguri to Darjeeling. How wonderful would it be to see the beautiful views of the plains? Passing through the tea gardens. Teak forests, lush green valleys and beautiful peaks of the Kanchan Jenga. I powered off the iPod and said. How nice would it be that once you have been to Darjeeling, then we both go to Norway together? Catch the Bergen Line train from Oslo to enjoy the snowy mountains of Northern Europe. What a joy for the eyes when our train passes through the majestic tunnels. And the beauty of the icy glaciers scattered along the way. Then I turned around and asked Grandpa. Do you have any dreams of a train trip? He replied in a sad tone. Now my dream is difficult to fulfil. Sit in the Khyber Pass and pass through time and history. Starting from Peshawar and ending at the Landi Kotal. There are three carriages behind a powerful steam engine. Travel distance is only thirty-two miles. The journey includes passing through rugged mountains. And witness the region’s thousands of years of history. The train crosses thirty-four tunnels and ninety-two bridges in such a small journey. It finally reaches its destination Landi Kotal at a height of three and a half thousand feet. It is so sad that because of the repeated flooding and short-sightedness of the policymakers, this amazing historical train journey is no longer possible since 2006… To be continued