The Journey Of Life.Grandpa & Me. Podcast Serial Episode 2 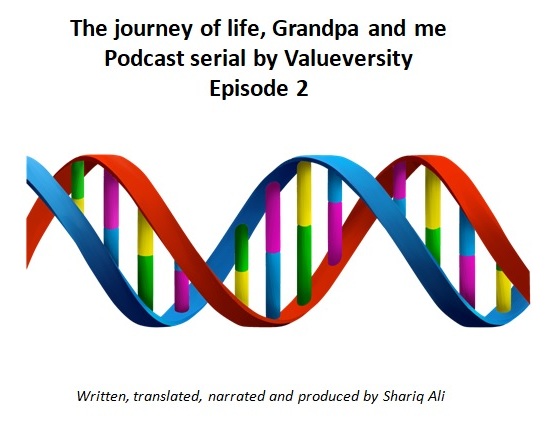 Enjoy the adventures of a teenage boy and the wisdom of his Grandpa in this serial. Fictional creativity blends with thought-provoking facts from science, philosophy, art, history and almost everything in life

When I felt the constant tension between my finger and the fishing rod, I skilfully pulled the rod out along with the silvery fish from the flowing water of the lake. And dropped it onto the green grass beside me. Grandpa was busy reading a book while sitting on the grass and using the tree as his back support. When he saw my big catch, he stood up and came very close to me. The small fish was shuddering in my palm. After appreciating my expertise, Grandpa carefully removed the plastic hook from the throbbing fish’s throat. Then I happily threw it back into the lake. Finishing off this great picnic adventure, we both sat on the shore and enjoyed the kebab paratha. I said I do not doubt that this fish is a living object. But on that day you were calling the green algae frozen on the trunk of a tree as a kind of life? Grandpa said. Life is a mysterious journey. One theory suggests that the heavenly lightning falling on the cosmic broth made up of the basic elements may have formed the DNA. DNA is the building block of life. Isn’t it the same molecule that stores and carries all the details of life like an encyclopaedia and is capable of dividing itself into its form?  I attempted to impress Grandpa. He smiled and said. Correct. Three-point eight billion years ago, this DNA debuts and divides and evolves as prokaryotes as the earliest form of life on the stage of earth. There is another idea that life was evolved somewhere else in the universe and brought by a meteor hitting the earth. The journey that began modestly with smaller than bacteria size prokaryotes, evolved over one point seven billion years into algae.  And then zero point five billion years ago into fungi. Regular plants and trees appeared about 400 million years ago. Then the saga of life took a new twist. Five hundred and eighty million years ago, the animals without the backbone became part of this story. Then five hundred and twenty-five million years ago, spinal cord animals appeared on the earth.  I said.  It means Grandpa, that the germs, trees, animals, us humans and all forms of life, began their journey at the same point in place and time? He said. You got it right. This is what the research proves! Scientists divide all life forms into families. It is true that this journey of life, beginning with prokaryotes, has been evolved and divided into sub-families of trees, animals and human beings over three point eight billion years……. to be continued