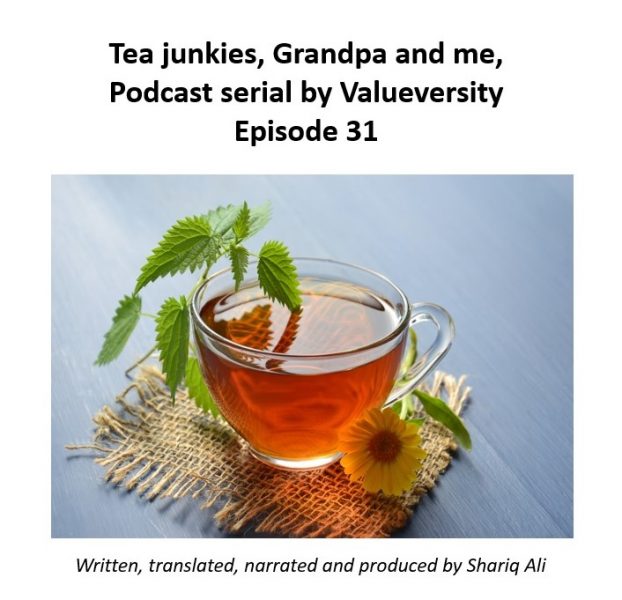 The story goes that five thousand years ago in China, a king named Shennong was sitting under a tree. His slave offered boiled water to drink.

Seven layers of dark and light shades of hot tea were visible in the transparent cup. This colourfulness lasted until the last sip. Uncle Patel was telling us about his recent trip to Bangladesh. He continued. Sri Mongol is the tea garden near the city of Sylhet where we were staying. Our cottage was on top of a small hill. There were lush green gentle hills covered with tea plants of similar height and shape all over. Every morning, it was a delightful sight to watch local girls engaged in picking up tea leaves. One day we took a walk to the nearby Lava Chara jungle. Not a thick jungle but a scattered mixed variety of trees. An uneven walkway going across with bushes on each side. Few jack fruits hanging from the branches of tall trees. We saw a few monkeys wandering around. The fragrance of scattered lemon trees was all over the forest. The green chameleon changed colour when we saw it. We then could not find it in the brown branches of the tree. On the way back, we came across poor children selling bouquets of wildflowers. In the evening, the hosts brought us to this tea shop. It is famous far and wide for its seven-layered mysterious tea. The chef makes the secret tea in a closed room. When customers inquire about the secret, his reply was a smile and a puzzling silence. When did tea first start Grandpa? I asked. Grandpa placed the cup of tea on the table and spoke. The story goes that five thousand years ago in China, a king named Shennong was sitting under a tree. His slave offered boiled water to drink. A few leaves of the Camellia sinensis tree fell off and dipped into the bowl. The king liked to drink hot water mixed with leaves. And so began the tradition of drinking tea. In the eighth century, a Chinese man named Lu Yu wrote a book titled classical tea. Then Japanese Buddhists who had gone to China to study Buddhism brought the book and tea with them to Japan. In Japan, the ritual of drinking tea became a spiritual experience. Uncle said. Portuguese started the use of tea in Europe in the sixteenth century. They were closer to the east because of the spice trade. But the Dutch brought the first ship containing the tea from Java to Europe. Then tea became a fashionable trend in the upper class of the Netherlands and even in Europe. Yani Apa took the teabag out of the cup and spoke. The first Coffee house started in London in 1652. This served expensive tea only on order. Catherine, the Portuguese wife of Charles the second, was a tea lover. Drinking tea became popular among the royal family and nobles. The East India Company started cultivating tea in Assam in 1839. Over the next thirty years, British excelled in this trade. Good quality tea from Assam and Ceylon gave the British an advantage over China in this trade. The fun fact is that the first use of teabag was in the United States in the early twentieth century…To be continued