Streets of Edinburgh. Grandpa and me. Podcast serial by Valueversity. Episode 36. 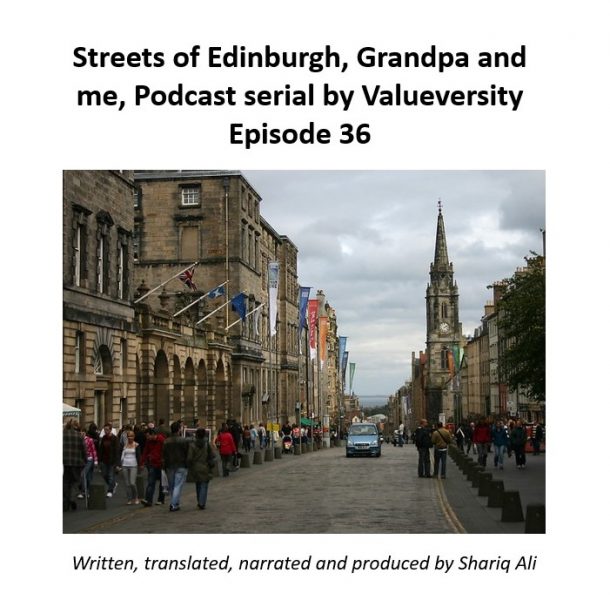 The old man was busy playing the bagpipes. He was wearing a green kilt (Scottish traditional men’s skirt). Yani Apa was recounting the Edinburgh Youth Festival. She said. Enjoying deep clouds and the pouring rain all the way, we reached The Royal Mile. The soothing melody of the bagpiper enchanted us. The Royal Mile is a one-mile-long chain of streets in the old part of the city. On both sides are hundreds of years old majestic buildings of historical importance. Many monuments and statues here and there. A rocky brick road passes between ending at the fort. We made a video of the old bag Piper. Praised him with few words. Put pound coins into his box and moved on. On our way to the castle, the host told us the horrible story of Maggie Dickson. For murdering a child, she received the punishment by hanging in this square. The doctor pronounced her dead after execution. The body was being taken to the cemetery on a horse-drawn carriage when she got up alive. The entire square became deserted in an instant. Twice the death penalty for a crime is not possible. Thus, she survived. Then the story of a murderer named Burke who killed sixteen innocent people. And sold their bodies for dissection at a medical school for some money. He was finally arrested and sentenced. We then reached the castle and saw the city from its height. On one side were the modern shopping centres on Princess Street. Opposite to this were ancient buildings with hundreds of years of history. Norman rulers built the castle on several thousand years old volcanic rocks. It is one hundred and twenty meters high. It started in the 12th century and took five hundred years to complete. The main entrance is on the east side. The castle has a natural landing and a dug trench on the remaining three sides. Because of this, it could have been very difficult to attack. Bailey is the lower and wider part of the castle. Where ordinary soldiers and servants lived. And there were residences, mess and weapons warehouses. Keep is the most important and highest part. Ruler used to live there. During the Anglo-Scottish Wars in the twelfth to fourteenth centuries. Each side lost and conquered it on various occasions. Then it became an arsenal in the fifteenth century. And a prison in World War I. I interrupted and asked. What did you learn from this international fair? I saw colleagues of different colours, races, religions and societies working together. Living despite differences of opinion. And it gave me a firm belief that any ideology, social norm or religion cannot be true. If it denies this universal human equality, love and harmony. This diversity in life is the will and perfection of the Creator… To be continued