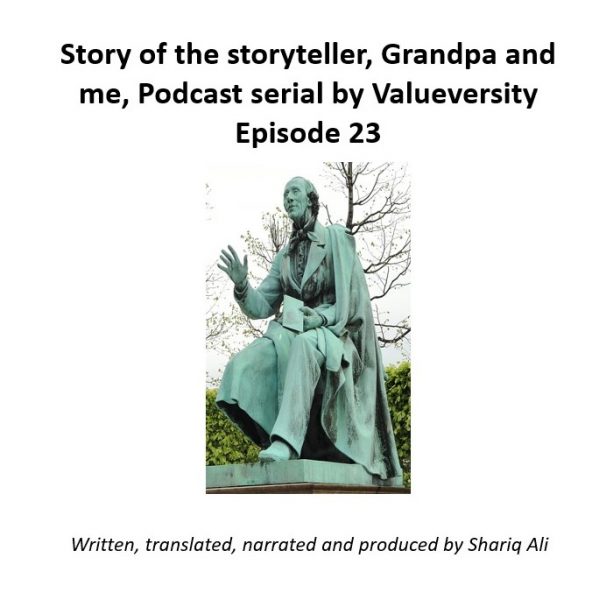 His own childhood was immersed in deep poverty and deprivation.  But he wrote great stories of love, splendour, and the wonderment for children

I and Babul were sitting on the lawn bench under the apricot tree thinking about how to end our story in progress. Babul used to contribute with superb imagination. I was good at converting ideas into sentences. When these joint stories get published on the Kids Club website, we used to feel delighted. The thinking work on the new story was in progress. We never knew when Yani Apa came with picked flowers in a plate in her hand and sat beside us. As soon as Babul realized that Yani Apa is with us, he disappeared. When she took the paper from my hand, I also blushed. But then I felt reassured when I saw appreciation rather than ridicule in her expression. Babul also came along. When we all three completed the story together, Yani Apa said. Let’s hear the story of a storyteller today. He was born in Odense, Denmark in 1805. His mother was a maid and the father shoemaker. By the age of fourteen, he has tasted all the flavours of poverty. His parents wanted him to become a dressmaker and his passion was to become an actor in theatre. Finally, he managed to get his parent’s permission to go to Copenhagen to try his luck as an actor. He failed as an actor, then a singer and then a dancer, but remained associated with theatre as a writer. What about his education? Babul inquired. She replied. At the age of seventeen, an affluent gentleman helped him. He managed to resume and complete his education. His stories are more of fascinating oral narrations and not scholastic writings. Failing a few times in finding love, he remained a bachelor all his life. Most of his life, he travelled and lived as a guest with his rich friends. He made a lot of friends. His friendship with English novelist Charles Dickens is remarkable. The impressions of personal grief, loneliness, and sadness are evident in his stories. His characters and settings show the worlds of the poor and bourgeoisie. The concept and impression of the story emerge in different minds in different ways. As if they were not stories but poems. Like our Intizar Hussein, he reiterated the stories told by his grandma in his style. But most of the stories and characters are original. The Ugly Duckling and The Little Mermaid are world-renown stories and characters. He felt embarrassed to write fairy tales. He could not have imagined that fairy tales are universal poetry. Adaptable to all cultures and languages. His first book could not have been more successful. With time, he gained a reputation as a novelist, playwright and a poet. Anderson’s contributions to world literature are his fairy tales. Almost all the languages and cultures of the world are familiar with his characters. Ugly duckling and the little mermaid are the household characters for children. Anderson departed from this world in Copenhagen in 1875… To be continued