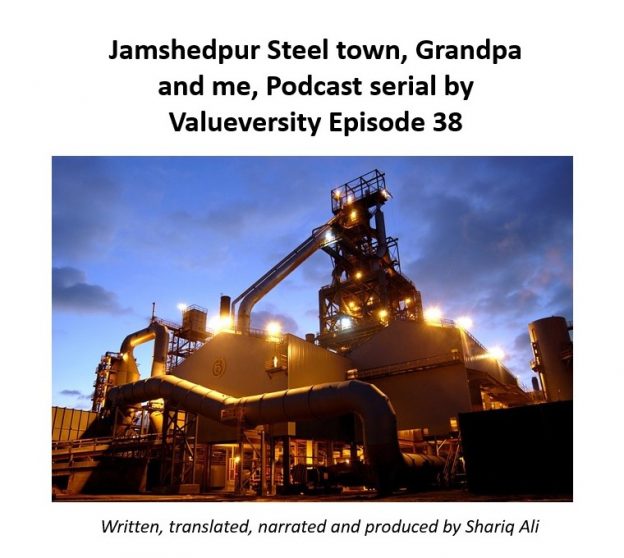 The driver stopped the vehicle near the small temple and said. Before starting the journey, please pray if you wish. A three-foot-high mud-brick wall all around and a dome standing on four pillars in the middle. Decorated with colourful designs. The saffron flag waving at the top. Under the dome, few passengers busy praying. And the priest keeping an eye on the offerings and cash box. When the driver returned from the puja, we left after putting some money as offering in the box. Uncle was in a storytelling mood and recounting his trip to India. He said. Departing from Delhi, the destination was Jamshedpur. My host had arranged to travel to Ranchi by plane and the rest by car. Ranchi Airport seemed a bit mediocre. Outside, a local car and driver was waiting for us. When we left the airport, a policeman stopped us. Dozens of armed guards first ran around the VIP’s moving vehicle. Then they rode in front and back jeeps and the traffic opened. This temple was at the beginning of Jamshedpur Road. By dividing Bihar in eastern India, Jharkhand’s state came into being in the year 2000. Ranchi and Jamshedpur are the two major cities here. Along the way, we found gentle hills full of bushes and trees. But most of the time the roads were going across the arid landscape. Lorry and vehicles of Tata Mills remained visible here and there along the way. When we reached Jamshedpur, it was a delightful sight. A clean industrial city with a population of eight lakhs. Yani Apa asked. The steel town named after Jamshitji Nisruvanji? I spoke before Uncle. And where Bollywood’s Priyanka Chopra was born. Yani Apa’s eyes sparkled. Uncle said. Correct. When we reached Jamshedpur, it was getting late. Hundreds of workers in Tata Mill uniforms were returning home on bicycles. Yellow helmet on the head and lunch tiffin tied at the back seat of the bike. Along the way, I saw many lush green parks. The hotel was in the city centre and very comfortable. The conference room was also nearby. Everyone was speaking the same language. You can call it Urdu or Hindi. Eighty-five per cent of the population in the city is literate. Tata is ruling everywhere. Tata Steel, Tata Motor, Tata Power etc. This flourishing is no doubt a success pride for the Tata family. Tell me more about Jamshtaji? I asked. He replied. The founder of the Tata group and family was born into a Parsi family in 1839. He lived up to 65 years. It would be correct to call him the founder of the industrial revolution in India. Then we visited Tata Steel mill. A team welcomed us with flowers. They first showed us a short documentary film and gave a brief introductory speech. Then wearing protective clothing and goggles, we went inside the factory. From the safe distance of a high balcony, we saw relays of fiery iron coming from the furnace. Cooling down, rolling and splitting into sheets. Yani Apa said. Remember Mamdu. Time is also like molten steel. If one can timely mould it into right decisions, it is so useful. Otherwise, a river of destructive fire… To be continued.