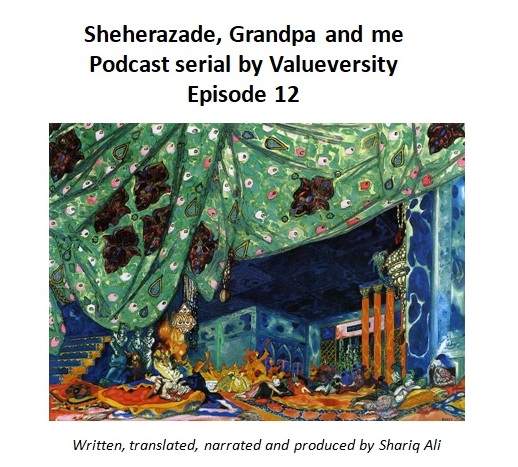 There was a flurry of elections in Neringabad. Live broadcasts, comments, discussions on TV channels. While having dinner and watching an election rally on TV, Grandpa said. Who could sympathize with those who repeatedly chose incompetent rulers?. Once the dinner was over and I and Yani Apa were sitting on the lawn chairs and enjoying the fragrance of the queen of the night, I asked. How come the public is so naive in our country? The public is just like Sheheryar Mamdu, she replied. Traumatized with day to day adversities and routines. Captive of the cruelty of circumstances and boredom. They need a storyteller, a dream seller. If they are lucky, they met Sheherazade, who tells them the true stories of life and persuades them to have faith and struggle for justice and love for all. It is unfortunate for the public that it gets to hear the false and deceptive stories of these politicians every time. Who were Sheheryar and Sheherazade Yani Apa? I asked. She replied. During the rule of Abbasid Caliphate, around 850 AD An unknown Persian writer compiled a collection of stories called One Thousand and One Arabian Nights. It is still a famous collection of folk tales compiled in the Islamic Golden Age. The story goes like this. Once upon a time a Sassanian king, Sheharyar, adopted a cruel way. He used to kill the beautiful wife he married every night before dawn. Generally believed reason for this cruelty was the revenge of the Queen’s infidelity. And some think he was under the curse of tyrannical witchcraft. His minister’s daughter, Sheherazade, who mastered poetry, philosophy, history and literature, one day decided to end this cruel way of life. She decided to become the bride of Sheheryar. The minister was worried, but she was very confident in her decision. On the night of the wedding, Sheherazade offered to tell the story and Sheheryar accepted. When the story began, Sheheryar was fascinated by the twists and turns of the story. The story was on an exciting turning point when the first ray of the morning emerged. Sheherazade paused the story and made Sheheryar realize that it was morning. But Sheharyar postponed the murder of Sheherazade until the next morning. The next night, Sheherazade resumed the story. And then this story goes on for the next, and then the next even for a thousand and one nights. Last night, Sheherazade refused to tell the story and offered to be killed. Sheheryar has fallen in love with her by that time. He made her his queen and thus the country was liberated from this cruel curse. The Aladdin, Sindbad sailor and Alibaba and Forty Thieves are some stories that Sheherazade told to Sheheryar….. To be continued