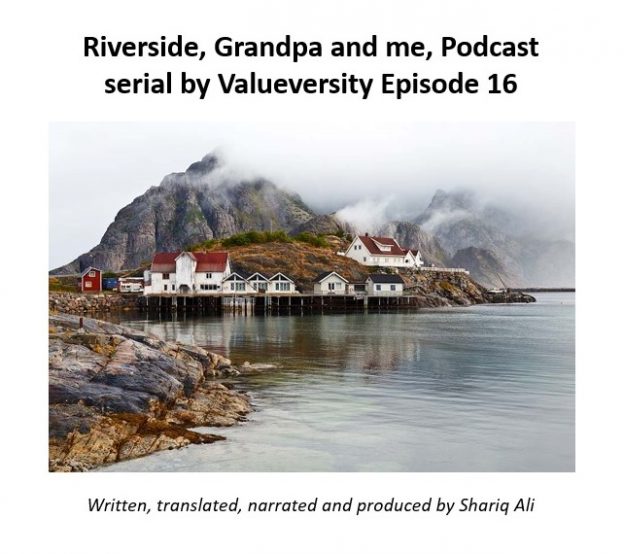 Riverside is the birthplace of civilizations. Why? Mamdu learns in this story

It seemed as if the waves in the flowing river are dancing the waltz while wearing golden, then orange, and now red costumes. Moving stealthily, the boat switched sides, and the golden sunset fell on Yani Apa’s smiling face and open black hair as if she has joined the Waltz of the flowing river. Grandpa and Uncle were sitting on the midsection bench of the boat and enjoying the sunset. Sitting on the stern, I was covertly mesmerized with the beauty of the sunshine falling on her face and alluring hair. The sailors operate on one side, sometimes on the other. This evening, having a riverboat ride was Yani Apa’s idea. When the sun went down and the sky turned darker, we all got off the boat and went to a restaurant by the river. Grandpa said: The civilization began on the banks of the river. But why? I asked. He replied. Ancient people were surviving on the hunt or fruit trees. Both were available on the banks of the river. The fertile soil was also there when they learned to grow crops. Human civilization began in four different river valleys in the world, between about three thousand three hundred and two thousand BC. Mesopotamia on the banks of the Tigris and Euphrates, Egyptian civilization along the Nile, the Indus Valley along the Indus River and the ancient Chinese civilization along the Yellow River. What is meant by civilization Grandpa? I asked. He said. Civilization comes from the skill of the people. City walls, pottery, working tools, musical instruments, toys, scripts and evidence of travelling to far-flung settlements are few signs of civilization. Uncle said. Amongst these civilizations, the five-thousand-year-old Indus Valley was the most extensive. In the area larger than present-day Pakistan, there are possible remains of about fourteen hundred small and large settlements. Some of these had a population of around eighty thousand. These were the first organized settlements in which residential and business areas were separated. According to some experts one million and others, five million people were living in Indus Valley MoenJodaro and Harappa are two great cities of this civilization which included regular drinking water, irrigation and drainage systems. Yani APA joined the conversation and said. In their class system, rich people engaged in gardens, music, religious rituals, various sports and entertainment, and the common people were either farmers or just slaves. Mind you Moenjodaro etc are the names we gave to these cities. We have no idea what they used to call these cities. The first use of dentistry and the use of idols is also exclusive to these cities. The port of Lothal was the first human-made port, built for the transport of goods… To be continued