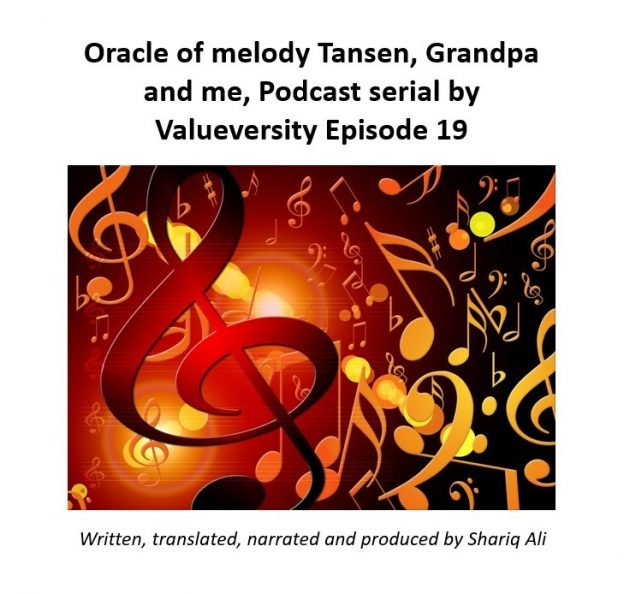 Returning home from the musical evening quite late at night. We agreed to stop over to Yani Apa’s favourite restaurant by the river. Our table was in the balcony and we were enjoying the dancing waves of the river in the moonlight. On my request, Yani Apa sang the famous Nayara Noor song. It’s raining in the veranda, and I am dreaming about you. I, Grandpa and Uncle was so impressed with her singing ability. Seeing a piece of cloud coming over, I teased Yani Apa. Look at this sign of raining due to the magic of your melody of rain. Everyone smiled. Grandpa said. Rain after Maigh Malhar and forest fire after Deepak Raag is mythical stories of Tansen. He is the founder of the classical music of northern India. He was born in Gwalior in 1506 and died in 1589. While holding the cup and enjoying her tea, Yani Apa said. He belonged to the court of Rama Chandra. He was then presented as a gift and became the courtier of the Moghul King Akbar the great. He fell in love with Akbar’s daughter Mehrunnisa and accepted Islam as his new religion. He was a devout follower of Hazrat Ghos. Akbar included him amongst nine of his eminent courtiers. Akbar liked him as his son-in-law and a great singer and gave him the title of Mian Tansen. He was a brilliant pupil of his teacher, Shri Haridas. Uncle picked up a biscuit from the plate and said. He composed and invented many melodies. Amongst these Bahirvan, Darbari, Malhar, Sarang and Rajesuri are more famous. He was a Sufi singer. Many believe that his death was due to an uncontrolled fire erupted from Deepak Raag (melody of fire). His grave is very close to the shrine of Hazrat Ghaus in Gwalior. Nearby is an old tamarind tree. As old as the shrine. It is a common believe that chewing its leaves is going to enhance singing ability. Grandpa said. Akbar once said to Tansen. You are the best singer in the world. He said to the king. There is only one singer in the world who sings better than I do. Akbar ordered to present this person in his court. Tansen explained that this artist does not attend the Royal court. To listen to his singing, we must go in person to his place. Akbar agreed. After a long journey, it was already late at night. Tansen said. He must be asleep by now. This is not the right time to go to his place. The next morning, Akbar was still in bed at the royal pavilion, his eyes open with a melodious song. He remained enthralled. This singer was even more melodious than Tansen. Tansen said to Akbar. This is my teacher Shri Haridas. I have learned all his knowledge and skills. But there is only one difference between me and him. Akbar asked. And what is that? Tansen replied. I sing to please the King of India, and he sings to praise the King of the universe, the almighty God…… To be continued