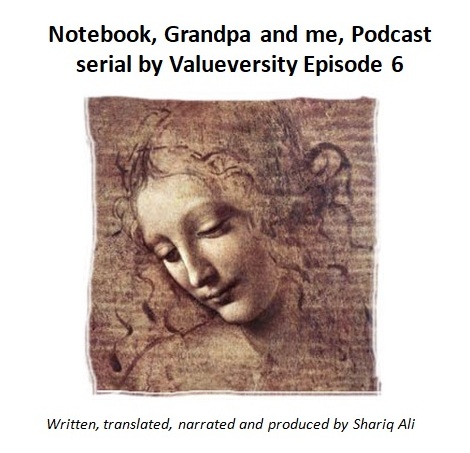 Story of a painter, sculptor, architect and engineer, who kept notes and drawings of his studies, ideas and inventions

There were three more passengers besides us. Phoolbun train station is in a very modest building. The entire scene, including the blazing sun and the train tracks on the ground, were waiting for the train to Nairangabad. Grandpa put his suitcase on the platform and tapped on my backpack and asked. Did you put your notebook? I answered him in a soft voice. Yes, Grandpa. And also the sketchbook. We boarded the train and sat quietly. Seeing trees running back through the window made me very sad. I was leaving behind an adventurous lifestyle with Babul in Phoolbun and perhaps moving towards a dull routine in Nairangabad. Also, I found Grandpa’s instruction of taking notes of interesting events and sketching new places very boring. Either he guessed it from my body language or just spontaneously said. Notebook and sketches remind me of a boy called Leonardo in the city of Vinci in Italy who was born in 1427. He was truly a renaissance man. It means a man with many talents or areas of knowledge. He was a remarkable artist, great inventor and a brilliant scientist. I looked at him inquisitively and said. The same enlightened Leonardo da Vinci Grandpa who died in France in 1519? He said. Right! So few skilled and intelligent people like him are born. At the age of fourteen, he learned sketching, painting, sculpture, and other skills from Verrocchio who was the master artist of that time. Today, only fifteen of his works are still preserved. His reputation as a master is still maintained because of the Mona Lisa and The Last Supper. The train stopped at a small station. We continued our conversation. Leonardo was accustomed to preserving everything he learned, experiences and ideas in the form of notes, drawings and sketches. Description of the human anatomy, preliminary sketches of his masterpieces, scientific sketches such as flying machines, war weapons, musical instruments, various types of pumps, construction designs, bridges, river diversion plans etc. His sketchbook is very interesting. In his time he was considered a famous artist. But his notes and sketches, consisting of thirteen thousand pages, tell us that he was a man of scientific thinking and an amazing inventor. Just as he was an anatomy expert and knew every detail of the human body, so too was he informed about horses, monkeys, and other animals. Can you see the point now of taking notes and sketches Mamdu Mian? ….. To be continued