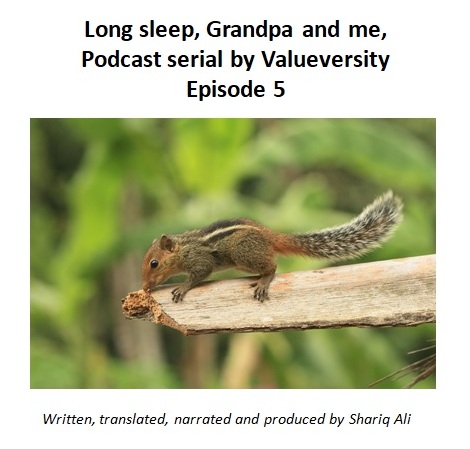 Enjoy the adventures of a teenage boy and the wisdom of his Grandpa in this serial. Fictional creativity blends with thought-provoking facts from science, philosophy, art, history and almost everything in life

Babul closed one eye and aimed sharply with the other and fired. Stone came out of the slingshot like a bullet but missed. Wild nut in its mouth, the squirrel jumped into the green bushes and disappeared. Grandpa’s instruction not to use the air gun on a harmless animal kept my hands tied and I did nothing. Babul seemed a bit depressed after missing the shot. Chasing squirrels and birds in the jungles of Phoolbun. Babul’s slingshot and my air gun. I am sure you got the picture. Yes, you guessed it right. Babul is my best friend in Phoolbun. His mud house with a tin roof is not far from our cottage. He helps his father on the farm since he passed the fifth grade. One year younger than me but two inches taller. Grandpa is happy to see us both playing but Babul’s parents do not. They hate Grandpa’s suggestion that Babul should continue his schooling. It can make a lot of difference even if one worker is less in the fields. After the missed hunt adventure, we both climbed the tree and reached the branch where the squirrel’s nest was. There we saw many wild walnuts stored in comfortable grass straw nest. Then we came down from the tree and sat by the river. Babul said. Greedy squirrel. What is she going to do with so many walnuts? I explained. Grandpa says many animals spend winter in a long sleep called hibernation. Perhaps she eats a lot of walnuts so that her body can stay warm during several months of long sleep. If you see a rodent called Dormouse lying round in the leaf nest and taking a long nap, you will consider him dead. The body is freezing cold and it is almost breathless so that oxygen and energy are consumed very little. Similarly, the long nap or hibernation of a wood frog is so amazing. Under dry leaves or a light layer of soil, along with the extreme winter, his body goes frozen. Even the blood becomes frozen in his icy body and the breathing is almost stopped. After several months, as the weather warms, he begins to breathe again. Nowadays, doctors have also started taking more time in their operation by cooling the body of severely injured patients or organ transplants. When the body cools down, the oxygen requirement is reduced or almost nil. And we humans can survive for some time without breathing. At the end of the operation, the body temperature is returned to normal by inserting hot blood into the veins…… To be continued