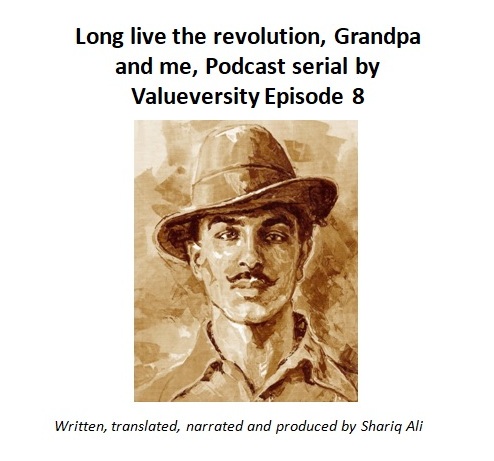 Yani Apa had an election in college, and she, her friends and I were extremely busy. Make posters, write pamphlets, and have heated debates, by staying up late at night. Every day I get to hear new words and phrases. Social consciousness, class struggle and so on. That day, while busy making a poster, I asked. Who is called revolutionary Yani Apa? She took a sip of hot coffee and replied. Nowadays it has become fashionable to be labelled as revolutionary. To be honest, true Bhagat Singh does not exist far and wide. Then I threw myself onto a sofa and asked. Who was this Bhagat Singh? She replied. A truly revolutionary and an unsung hero of India and Pakistan. He demanded freedom from the British Raj and raised the slogan of Long Live the revolution in the Indian subcontinent. He was born in the Punjab of present-day Pakistan in 1907. And at the tender age of twenty-three, in 1931, British hanged him. But why? I asked surprisingly! He was a free spirit and kept on demanding freedom for all in the subcontinent. She explained. He disagreed with Gandhi ideology of non-violence and was convinced for armed struggle. From his childhood, he showed great leadership qualities and had a very pleasant, intelligent and likeable personality. At the age of twelve, he brought home the innocent blood-stained clay from the Jallianwala Bagh tragedy in 1919. He kept it preserved in a bottle and used to lay flowers and salute it every morning. On the night of the scheduled wedding, he left home without telling anyone and wrote in his letter. The purpose of my life is the freedom of India, not the pursuit of personal happiness. I sacrifice my personal life for the freedom of the nation. Then he joined the National College Lahore which was the epicentre for the freedom movement. He became a vigilant, fearless and an important member of the Republican Association of India. At first, he was passionately supportive of Gandhi’s peaceful civil disobedience. But soon he became convinced that freedom could be achieved only by taking up arms. Then during the same armed struggle, he was arrested on the accusation of throwing bombs on the British Constituent Assembly. In a judicial statement, he and his comrades said that it is needed to speak loudly to the deaf people. Our blasts voice loudly and clearly to the British to leave India. Freedom is our destiny now. On the night of his execution, he and his companions came chanting slogans of long live the revolution and fearlessly embraced their execution one by one. Their bodies burned and ashes washed away in Satlaj River…… To be continued