Lion or a fox- Machiavelli. Grandpa and me. Podcast serial Episode 34. Shariq Ali. 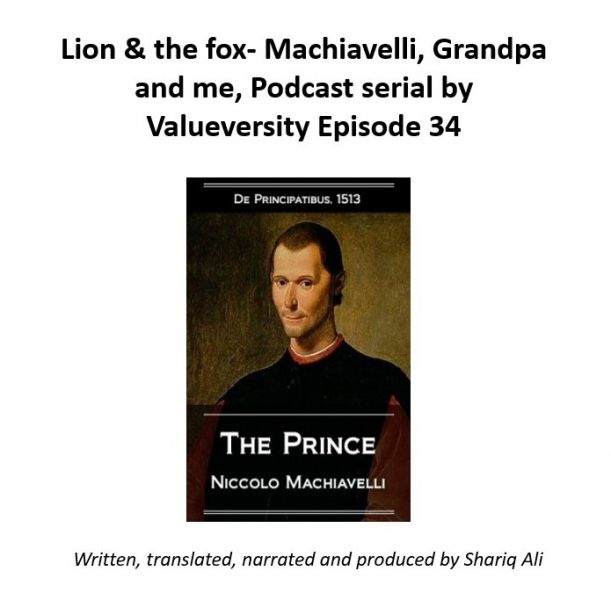 This episode is about Machiavelli and his famous book The Prince. Mamdu learns about the cruelty of politics

We were very happy to find books of choice. Today, when Grandpa and uncle decided to come to Kiranpur, I and Yani Apa also joined them. Kiranpur is a small town fifteen miles from Pholbun. We often go there to find favourite books in its book shop. On our way back, when we stayed in the municipal library for a while, there was no one there but us. While turning the pages of a book, I asked. Can a book have a negative impact? Grandpa said. This reminds me of a famous book titled The Prince. Niccolo Machiavelli (1469 to 1527) wrote this book during the renaissance period. It is amongst the ten influential books of the world. Please tell us more about it? I requested. He said. It was a kind of a job application to the Prince of Florence. Five years after the author’s death, it got published. So controversial and thus gained worldwide fame. This is a simple and practical guide for rulers. Machiavelli was an Italian historian, military, political adviser and an author. He had a keen interest in politics and history. What does he write in this book? I became curious. Grandpa replied. The heartless tactics of politics. For example, he writes that a prince should be merciful only if it is in his best interest. Otherwise, it is not the love of the people but their fear that should be the means of governing. The ruler must be a lion and a fox at the same time. The fox that can escape the conspiracy and deception. And the lion that can deal with attacking wolves. Being a lion is not enough. Realist survives and idealist perish. He says political success is more important than adherence to moral principles. To maintain power. He even advocates the assassination of the previous ruler and it’s generations. These are controversial ideas. But he gives strong historical arguments in support. According to him, morality is a secondary consideration and subject to circumstances. It is permissible to compromise on principles for success. It is as if Machiavellian thinking is blind to desire. It is deceitful and cruel. Unfortunately, the majority of politicians seem to agree with Machiavelli. An example is US President Richard Nixon who considered himself above the law. Yani Apa said. Machiavelli’s tactics are short-sighted and can only achieve temporary success. Follow the path of Socrates for long-lasting success. Adhering to the universal moral principles he describes is the key…To be continued