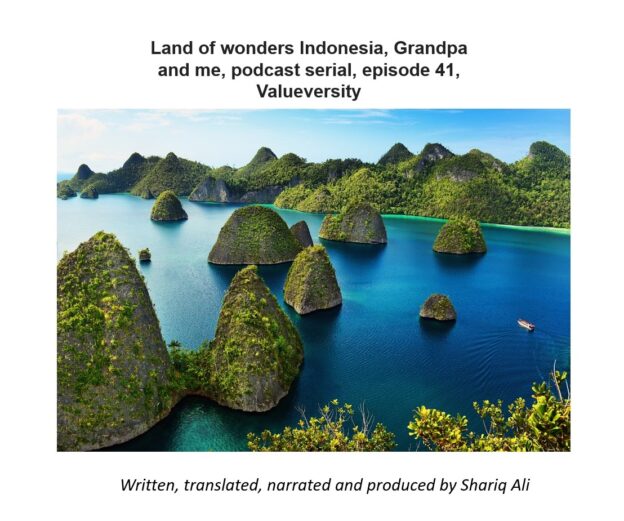 Queuing at the World Trade Centre on Singapore’s Harbourfront in the morning sun. It was such a pleasant experience. Chinese, Malay, white and Asian all sorts of colours were there like a rainbow. Shortly after, our ferry was sailing on the sea. Our destination was Batam Island, Indonesia, twenty miles away. Purpose of visit for most people was duty-free shopping. And I wanted to have the glimpse of the land of wonders. to encounter the mystery. I planned to return to Singapore tonight. Seventeen and a half thousand islands scattered on either side of the equator. Inhabited islands are only around six thousand. Some of them are large islands such as Java and Sumatra. Many unnamed and uninhabited islands covered with dense forests. A country of rare wild animals, plants and the world’s largest flower Rafflesia. Largest Muslim country in the world. Hundreds of nationalities, languages, customs and a population of 250 million. When we reached Batam, I felt a bit disappointed. Bustling business activity. Pursuing Duty-Free Shopping Sales Agent. Shopping malls full of people and activities all around. I turned to the taxi counter according to my plan. A twenty-two-year-old Malay driver became a guide and driver for the day. Areef was a full-time student but used to become a tourist guide during the holidays. He told me that Archaeologist has found traces of early humans who lived in Java one million years ago. Then these human groups reached other islands. In the sixteenth century, Dutch merchants found these islands ideal for the transit. Then they made it their colony by naming it East Indies. In 1945 we became an independent country. At Areef’s suggestion, we saw the Buddhist temple of Vihara. It was very close to the Central Ferry Terminal. An important temple for Buddhists. There was a statue of Buddha in the big hall. And the goddess of mercy and other statues in the small rooms next door. Also, a small shop with Buddhist items. And the adjoining vegetarian restaurant. Fresh vegetables cooked in coconut milk with light spices mixed and boiled rice on the side. Areef said during the meal. There are several volcanoes in Indonesia, and many continue to erupt. Seventy-five per cent of the world’s volcanoes are here. Jakarta, which is the capital, has a population of 14 million. The rainforests are home to rare wildlife. Lions, leopards, elephants, orangutans, wild rhinos, and Komodo dragons. Agriculture and oil are the two main sources of income. The rupee is their currency. Liking for Badminton is to the point of insanity. Gold Medal is often won in the Olympics and World Cup. There are three mysterious lakes near the mouth of Kelimuto volcano. Their waters sometimes turn green, sometimes red and sometimes black. The combination of volcanic chemicals with water is the cause of this colourfulness… To be continued