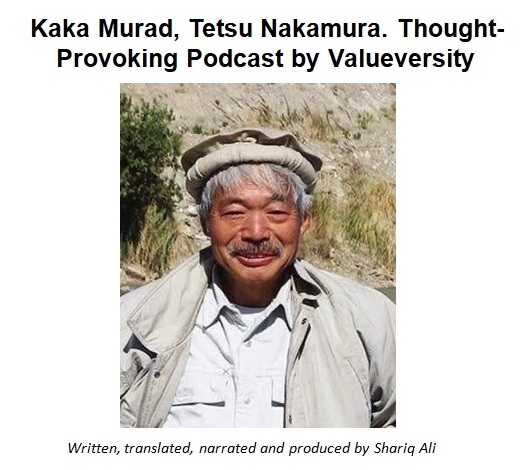 Doctor Tetsu Nakamura was targeted and killed in Afghanistan on 4th December, 2019. Valueversity pays him tribute by telling you his story

Love blinds reason. Though born in a lush green ancient city of Japan Fukuoka in 1946, Tetsu Nakamura fell in love with the war and famine struck people living in the barren land of eastern Afghanistan. Wearing traditional Afghani outfit and speaking fluent Pashto, he was endorsed by the Afghan people as one of them. They called him Kaka Murad. Afghan government acknowledged his services and gave him honorary citizenship. His dream was to eliminate poverty and hunger for the unfortunate Afghan people. Motivated and powered by his love for humanity, he devoted his life to construct irrigation canals from the Kunar River in eastern Afghanistan to convert arid terrain into fertile land. He knew he is risking his life for this heroic cause working amidst war and unrest. On the 4th of December 2019, the humanitarian aid convoy led by Kaka Murad was ambushed near Jalalabad by two vehicles carrying seven armed men. They opened fire after identifying him sitting on the front passenger seat. His body received five bullets of automatic weapons from a close range. Accompanying driver and three workers were also killed. The assailants confirmed his demise by saying the game is over. They then left the scene. Kaka Murad was still alive and breathing but could not make it to the hospital only fifty miles away. Taliban denied any involvement in this killing. Afghan officials blamed it on ISI proxy as they do but without any proof. So what was the game Kaka Murad playing?  It all started in 1984 when this Japanese doctor volunteered his services to provide medical care to the sufferers of the Afghan war in the city of Peshawar. This was the first time he was exposed to the Afghan humanitarian crisis. His initial plan was to serve for six-seven years and then go back to Japan to continue his professional career. This plan was never materialized. How could he break up when his soul was immersed in the love for humanity? He was energized with an intrinsic motivation to help the sufferers. He simply carried on. In the next few years, he established three medical centres in various parts of Afghanistan. After treating patients tirelessly for so many years, he painfully realized that the main issue is not the disease but hunger and ensuing nutritional deficiencies. He wrapped up his medical white coat and put on a dusty field worker jacket to join his agriculturist friend Kazuya Itu. A humanitarian worker, an agriculturist and an expert in using old Japanese techniques that required little technology to help villagers displaced by drought to build a network of canals from the Kunar River. Kaka Murad was now convinced that this is the best way to help Afghan people. Converting poor villagers into well off farmers. In 2008, Kazuya was first kidnapped for ransom and then tortured and killed by the Taliban. Kaka Murad refused to be terrified of this happening. His devotion and commitment to this mission were amplified. Because this was not the first time he was so close to death. The first time, when he managed to escape the automatic machine gun fire so closed to him from an American gun shop helicopter. Then again, when he was almost drowned in River Kunar while rescuing the local flood victims. He took over command instead of Kazuya and continued his game to serve humanity. In the Khewa District of Nangarhar province, with the help of local villagers, he constructed a twenty-five kilometre-long irrigation canal that revolutionized the lives of six hundred thousand poor Afghanis. Drought-stricken poverty was converted into productive farming. His organization constructed eleven small and medium-sized dams on River Kunar and sixteen thousand hectares of land were converted into fertile terrain. In Gamberi, the suburb of Jalalabad, thick green jungle and fields singing with bountiful crops were created. He constructed two hospitals and two mosques in the area as well. He used to say that the solution for the Afghan problem is not arms but an agricultural revolution. Constructing one canal is more productive than the works of a hundred doctors. His service for humanity was recognized internationally and he received the Ramon Magsaysay Award, considered to be equal to Nobel Peace Prize in Asia. To him, his real award was the respect he earned in the hearts of poor Afghanis and his home town. His funeral service in Fukouka was attended by thirteen thousand mourners. Just above the coffin wrapped up in the Afghan flag, the smiling picture of Kaka Murad was accompanied by other Afghani victims killed in the incident. It was as if he was smilingly saying with resolve. The game is not over yet. His organization Peshawar Kai announced that work on all projects of Tetsu Nakamura continues