George Orwell. An Orange Is Trodden By The Dirty Boot 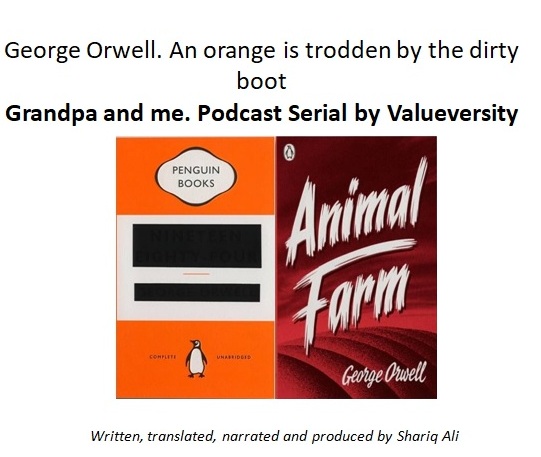 This podcast serial takes you through the adventures of a teenage boy and the wisdom of his Grandpa. Mamdu is fifteen with an original mind bubbling with all sorts of questions to explore life and reality. He is blessed with the company of his grandpa who replies and discusses everything in an enlightened but comprehensible manner. Fictional creativity blends with thought-provoking facts from science, philosophy, art, history and almost everything in life. The setting is a summer vacation home in a scenic valley of Phoolbun and a nearby modern city of Nairangabad. Day to day adventures of a fifteen-year-old and a retired but full of life scholar in his seventies runs side by side.

Grandpa was in a nostalgic mood. He said “when I was a student in London and living in a box room in Hampstead area as a paying guest, my only leisure pass time was to go to the west lane in search of second-hand books. My scholarship was so meagre that if I buy a book then I could not afford to have fruit or dessert for the entire week. Once I bought the novel animal farm and coming back to my room having it in my hand, my old landlady told me that probably in 1929, George Orwell used to work as an assistant in a book shop in Hampstead area. Who was George Orwell? I asked. He said. World-renowned journalist and a famous novelist. He was born in Bengal in 1903.  He was only one year old when he travelled with his father back to England. Even in the absence of parental support, he turned out to be a very bright student of Eaton College. After graduation, he took his first job in British police and was posted in Burma in 1922. This was his first exposure to the ugliness and cruelty of imperialism. He resigned from his job and took up the pen as a weapon. For the rest of his life, he kept on exposing the crimes against humanity and became the voice of resistance against imperialism. Then for many years, he remained jobless in London and Paris. He barely survived hand to mouth with meagre earnings from his writings. Probably he contracted tuberculosis while he was living malnourished and poor in the Hampstead area. What is the theme of animal farm grandpa? He smiled and replied. Has it come to your mind ever that what does animal think when they suffer human cruelty? If they became determined to revolt, what extreme they can go to? Manor farm animals revolted on the principle that all animals are equal. As the story progresses, the contradictions of this principle become obvious. The story is thought-provoking but makes you sad at the same time. Orwell, in a very simple and skilful way, depicts the contradictions of the Russian Revolution, Stalin era atrocities and the human condition while apparently telling an animal story. Yani Aapa joined in the conversation and said. As a socialist, he considered it necessary to join the Spanish Civil War. There he saw the Communist Party betraying its own workers. Meanwhile, a fascist shot hit his neck but he survived. Then he achieved some financial well being when he started writing reviews in the New England Weekly. Later on, he worked in the BBC Eastern service. The task was to launch a propaganda campaign in order to gain Indian support for British imperialism. He remembers this period with sorrow and embarrassment. He says “The income was great but it felt like an orange that has been trodden by a very dirty boot”. Following his conscience voice, he quit this job as well. In 1945, the publication of Animal Farm made him world-famous. In 1949 he wrote his second famous book, Nineteen eighty-four. He left the world at the age of forty-seven. Tuberculosis killed him which he contracted during his days of poverty…. to be continued