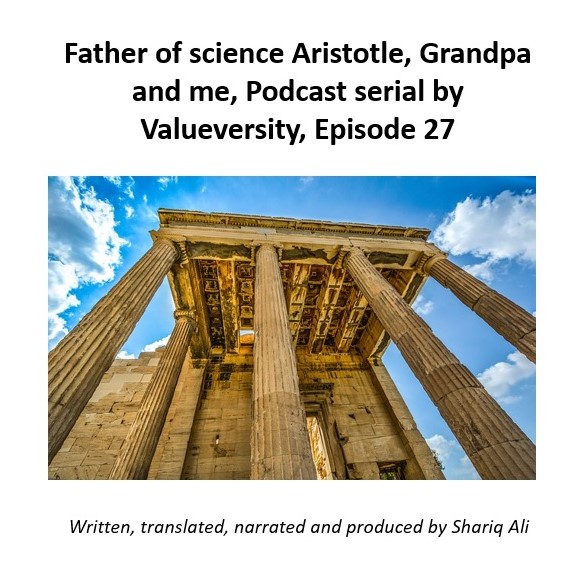 Enjoy the story of Aristotle. Father of modern science, one of the greatest Athenian philosophers, the pupil of Plato and teacher of Alexander the Great

Stream from the waterfall was hitting the rocky cliff. This was causing a shower of droplets all around. Grandpa’s garden chair and our picnic mat were a little out of range from this shower. Yet there was a sense of pleasant humidity in the grass and surrounding trees. Yani Apa was busy taking pictures and Instagramming friends. Grandpa was relaxing on the chair with a newspaper covering his face. The debate was going on between me and Babul. A frog is a fast swimmer or a duck? Our discussion got prolonged. Grandpa put aside the newspaper and decided to sit beside us. He said. Aristotle was Plato’s disciple and Alexander’s teacher. He had a keen interest in nature and wildlife like you both. Let’s hear his story then. I and Babul became delighted and attentive. Grandpa said. Aristotle was born in Greece in 385 BC and lived for sixty-two years. He is the founder of the scientific method still in use. And that is observation and logical reasoning. He is the founder of modern science. His father was a royal physician. In his childhood, he met Alexander at the royal court. Later Aristotle taught Alexander logic, mathematics and philosophy. Alexander conquered a vast area of the world. After getting his early education, Aristotle moved to Athens at the age of seventeen. He first became a student and then a teacher in the Plato’s Academy for the next twenty years. Academia’s method of teaching was simple. The students and teachers would gather and ask a question. Someone would give a possible answer and the discussion will begin. Then all would gain knowledge through discourse and generating ideas. Yani Apa first took a picture of us from the iPhone. Then she joined the conversation and said. After leaving the academy, Aristotle travelled all over Greece and Turkey. He got married as well. Wrote a detailed book on the animal kingdom and their procreation. He divided them into different families and categories. Make detailed pictures of their body parts and explain the functions. Then he returned to Athens and established his school lyceum. He began to teach physics, politics, logic and philosophy there. He had a unique thought process. He devised and followed unprecedented methods. Written account of all observation even the minute details was necessary. To find out the truth, he recommended performing practical experiments. For example, he was the first one who dissected animals. Before him, traditional Greek philosophers relied on philosophical discourse and thinking. Aristotle says that we can understand any event based on four causes. They are the material, formal, efficient, and final cause. The material cause is its physical properties or makeup. The formal cause is the structure or direction of a being. Efficient cause consists of things apart from the thing but connected. For example, the efficient cause of a table is a carpenter acting on wood. The efficient cause of a child is a father. And the final cause is the ultimate purpose of its being. This wise man, two and a half thousand years ago, offered some foolish ideas as well. For example, the world is round, but it is static and centre of the universe. Or the source of intelligence is the heart, not the mind… To be continue..