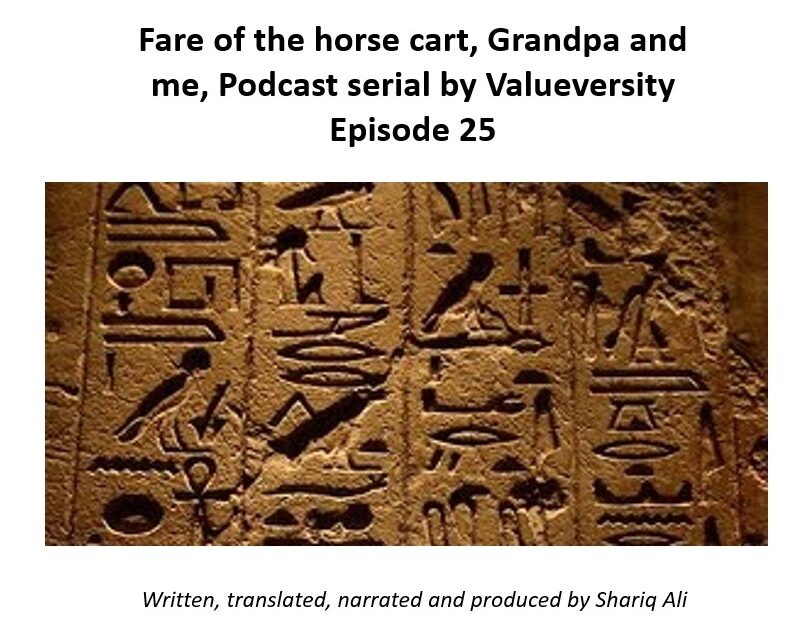 Grandpa was holding a book in his hands, and I was holding Kindle. He smiled and said to me. Without having a feel of turning the page on your fingers, how can you enjoy reading a book? While decorating flowers in vases, Yani Apa said. Mamdu is holding a library in his hands, not a book Grandpa. Then she asked me. How many books are there in your Kindle? I replied. Around fifteen hundred and dictionary extra. Place your finger on any word and here comes the meaning and detailed description. Grandpa said. No doubt, ideas are travelling at a high speed nowadays. And so cheap as well. Spreading information such as written text was never so easy and fast in the history of mankind as it is now. Please tell us about the evolution of written text Grandpa. I requested. He said. Verbal language is more ancient than written text. Body language and utterance of few meaningful sounds may have emerged earlier. The written text came much later. Thirty thousand years old paintings in the caves of Spain and France are the first written text of a kind. When ancient human evolved into groups. Need to prove ownership for the barter of things emerged. Hunt, crop, animal, or piece of land. The written text came into being because of this practical need. Archaeologists have discovered ownership plaques in Mesopotamia as old as 4000BC. Then evolved a picture language that was a straightforward drawing of things. Then manipulation and arrangement of shapes and pictures to create meaning. Finally, the alphabet associated with verbal sounds emerged. Mesopotamia, Babylonia, ancient River Nile. All civilizations have contributed to the evolution of alphabet and language. Yani Apa opened the window facing the lawn, a fresh breeze came in. Grandpa took a deep breath and said. The earliest evidence of writings is the name, Narmer. The first pharaoh of Egypt. Written on the clay cylinder in 3100 BC. Egyptians invented Papyrus around 2800 BC in Egypt. It reached Greece around 650 BC. Papyrus helped the start of proper book writing. Writings on silk textile began in China around 400BC. The creation of the Library of Alexandria in 295 BC was a great breakthrough. It preserved written knowledge. All ship’s anchoring at the port used to submit written material on board to the library. It was then transcribed, copied and preserved in the Alexandria library. Yani Apa handed over a hot cup of tea to grandpa and said. In the first century, the Chinese used a crude form of paper produced from the vegetable. Five hundred years later, the paper industry travelled from China to reach Japan. And finally, to South Asia. Then came the Gutenberg printing press revolution in 1439 AD. It spread the knowledge to the common man through printed books. And today’s world is a fascinating age of information explosion. Computers, digital communications and its foundation microchip has revolutionized current times. Information access, storage or its transfer in the form of text, pictures or sounds is so easy. And so cheap as well. As if someone is travelling on a spaceship and paying fare for the horse cart… To be continued