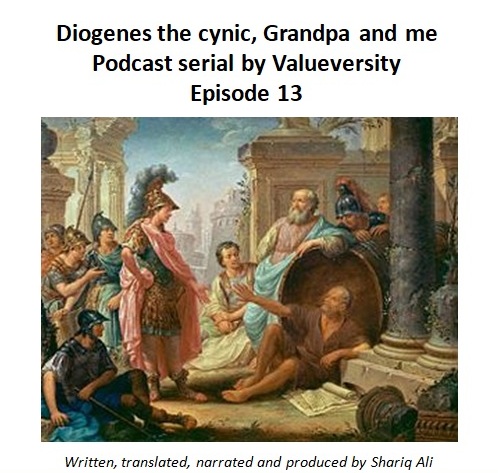 The lights of the Nairangabab library lecture hall were dimmed. Professor Agha began his talk. Grandpa, I and Yani Apa were sitting in the third row of benches. Professor of philosophy delivered his initial remarks. Today, we will talk about the concept of human happiness as explained by the famous Greek philosopher Diogenes. He was born in Sinope, present-day Turkey, in 404 BC and died in 323 BC. He used to live in a barrel and the total assets he had were a robe, a bag and a cup. One day he saw a boy drinking water by joining the palms of his hands, and he threw his cup away. In his view, rich and wealthy are those who are happy to cope with the minimum. Plato gave him the name crazy Socrates. He was extremely popular amongst common people of Athens, and they used to call him a cynic. Once the naughty teenagers broke his barrel, the Athenians managed another barrel for him. He always hated the ostentatious display of wealth. On one occasion he spits on the host’s face in a ceremony full of luxurious rugs and velvet pillows. Then he apologized, saying that he found his face the least worthy in these expensive surroundings on which he could spit without hesitation. His encounter with Alexander the Great was very interesting. This conversation took place when the ruler of Athens got off his horse and stood in front of the Diogenes lying casually in the sun. Alexander said. I am Alexander the Great. He kept on lying as before and replied. And I am Diogenes the cynic. Alexander: Are you not afraid of me? Diogenes: Are you good or bad? Alexander: Good of course. Diogenes: why should I be afraid of good then. Then Diogenes asked. What is the plan? Alexander replied. Conquering entire Greece. Diogenes: And then. Alexander: Conquering entire Europe and Asia. Diogenes: and then. Alexander: conquering the entire world and live a life of a victor with peace, prosperity and comfort. Diogenes said. Then why not start a life of a Victor with peace, prosperity and comfort today. Alexander became speechless to this suggestion but courteously said to him before leaving. Please let me know if you need anything of the world’s blessings. I will make sure that it is present at your service. Diogenes replied. Will you please stand aside so that the sun can reach me. Then Professor Agha glanced at the clock and started to summarize his talk. Ladies and Gentlemen, Diogenes views are worth reflecting. He says there is only one good and that is knowledge. Only one evil, that is ignorance. Why not smack the teacher instead of punishing a poor performing student? The foundation of a successful nation is the education of the youth. He used to call himself the citizen of the world instead of Athens. Once someone asked him what is hope? He replied dream of the awake. He says all creation is the possessions of God. Wise people are God’s friend. Friends share everything. Therefore, all creation is the possession of wise human beings… To be continued