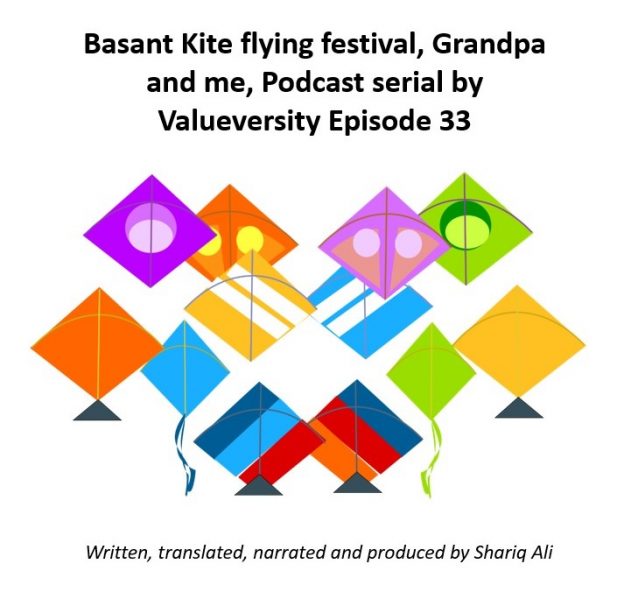 Basant Festival of Kites is to celebrate the first day of spring. It is a time for families to gather together and spend the day flying kites. In Lahore, a huge crowd participate and Kite flying competitions take place.

We had set up a temporary tent in the grassy ground next to the mustard field. Enjoying the fresh breeze of the early morning, we were waiting for breakfast. The tent smelled of carrot pudding and saffron sweet rice. Naseeban Boa would take the hot Poories (tortillas) out of the frying pan. And put them in the pot lying near the Omelette and spicy mashed potatoes. I was wearing a yellow T-shirt and jeans. Babul was wearing mustard colour laacha (traditional rural dress). We both were waiting for the kiting festival to start. Grandpa and Uncle entered the tent wearing yellow turbans. Following them was Yani Apa. Wearing a beautiful yellow cotton handmade dress and matching bangles in both wrists. Uncle said. See the kites brought from Nairangabad before breakfast. When we came out of the tent, there were colourful kites on the table and strings wrapped in spinning wheels. Like a bouquet decorated with flowers. I and Babul were so excited. I asked. Grandpa, when was the first kite flown? He replied. The first kite made of silk and bamboo was flown in China about three thousand years ago. Then it reached Japan and other Asian countries. In the beginning, kite-flying was to thank for the good harvest as a religious ritual. Then it became a popular sport amongst masses that continued throughout the year. Scientists also used it for various purposes. To check weather conditions, to understand flight principles. Leonardo da Vinci used it to measure the width of the river. Marconi used a flying kite in 1901. And send the first trans-Atlantic telegraphic message. Uncle said. Let`s have breakfast? Then we all did full justice to delicious breakfast. Uncle said. Ninety-nine years ago, Ranjit Singh and Queen Moran Sarkar started this festival. It was to celebrate a good harvest and start of the spring. They would have never imagined how popular this festival will become. It spread in every direction like a breeze of fresh air. Crossing all borders and drawn lines of religion and beliefs. Kites will dance in the skies and human spirit will dance on the earth to the beat of drums. Girls on the swings and songs in the air will generate waves of happiness. There will be laughter and harmony everywhere. Grandpa said. This has a tragic angle as well. Careless use of deadly and banned strings costs many innocent lives every year. It is the responsibility of the government to overcome this tragic situation. Banning public aspirations like this festival is not the answer. When we headed for the field with kites in our hands, I said. How nice that at the same time the skies of Lahore, Delhi, Amritsar and Kasur will be colourful with kites. Yani Apa said. The aspiration of common people will defeat the barbed wire divide once again. Like flowers that bloom in the spring and defeats them every year. … To be continued