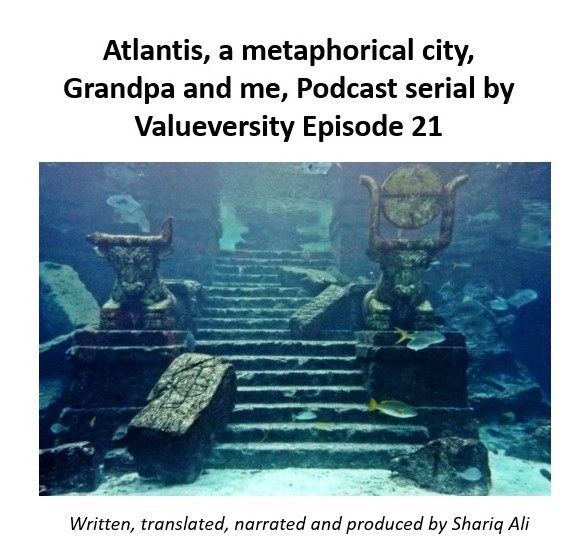 Plato`s fantasy, a marvel of fiction or historical reality? The mystery of Atlantis is still unresolved

The sitting room was comfy with the fireplace on. The weather was chilly in Phoolbun. We were enjoying dried figs, pistachio Iranian dessert with hot coffee. The conversation was full of low threshold laughter between. Yani Apa said while staring at the oil painting on the wall. There is a picturesque impression of a remote island in this painting. Who knows it may be like Atlantis? Grandpa said. Plato’s stories know how to put fingers on the pulse of the human condition. That makes them eternal. The story of Atlantis has survived for more than two thousand years. The mystery never ends. This ancient mythical city is still painted with various colours of human imagination. The inhabitants of this city were half gods and half-human. They lived in palaces built on small islands along the coast. The central canal passes through the heart of all these small islands. This was the connection between these and with the central capital island. Gold, silver and other precious metals used to construct buildings. There were beautiful and rare trees along the paths. A variety of charming wild animals were roaming in the woods. Majestic buildings of the capital island displayed power and good taste of elites. The society was ethical and superior. Then greed and love for luxury became prevalent. Higher moral values and ethical principles began to decline. This made the gods angry. The final scene of the story is the horrific night of the volcano. Huge waves of the tsunami due to the earthquake caused the destruction and drowning of the city. The narrative continuity of the story seems so real. Explorers have been searching for this lost city for centuries and even today. They have tried various places on the world map. Mediterranean, Spain and Antarctica are few examples. It is unlikely that this story of Plato is true. He may have created this fictional story for philosophical discourse. He was very fond of topics such as human nature, the search for truth and the ideal society. The story of Atlantis has it all. The destruction of the Minoan civilization by the volcanic eruption looks similar. This destroyed the Greek island of Santorini. This happened three thousand six hundred years ago. But Plato’s Atlantis was nine thousand years old …. To be continued