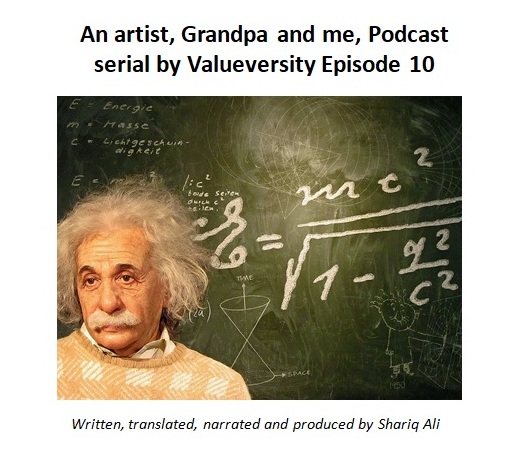 Story of a great scientist who once said:  I am enough of an artist to draw freely upon my imagination.

The doorbell rang, Grandpa opened the door. Dressed in a government uniform, a bag in one hand, an envelope in the other. I was stunned by fear and kept on hiding in the corner. After signing and opening the envelope. Grandpa read the letter and gave it to me and said. An A star in Maths and the As in the rest of the subjects, our Mamdu have surely beaten Einstein. I was so happy that I did not know what to do. We spent some time in greeting and hugging and eating desi mithai. Then when everyone sat on the sofa for tea, I asked. Didn’t Einstein count as an intelligent student at school?. Uncle replied. Born in a Jewish family in 1879, he was considered an average student by school teachers in Munich. Since his early schooling, he has had a keen interest in physics and mathematics. In 1900, after completing his education, he worked in the Patent Office and studied theoretical physics in his spare time. Over the next five years, he wrote astounding scientific articles. This includes the Theory of Relativity and his famous Formula E is equivalent to MC Square. I asked. What is the benefit of this formula? Grandpa explained. This formula expresses the fact in mathematical terms that matter is also a form of energy like heat and electricity. Then devices were invented that can break down tiny particles like atoms to produce a lot of energy. Thirteen per cent of the energy produced in the world today is because of this formula alone. Unfortunately, this is also the reason for the invention of the atom bomb. Yani Apa put a piece of cake in a plate and said. Einstein became Professor of Zurich University in 1909. After a few years, the first World War began. His Theory of Relativity gained global fame in 1919. His work was praised in scientific journals, and he received the Nobel Prize in 1921. Due to the unsettled political situation, he left Nazi Germany permanently in 1932. The Princeton University of the United States became his permanent place of work after 1933. When the second world war began in 1939, he wrote a letter to Roosevelt, the US president of that time. He convinced him to develop the atomic bomb before Nazi can get hold of this technology. But please also remember that it was none but Einstein who first proposed the UN as the peacekeeping force. He worked on the Unified Field Theory until his last breath but did not succeed. He left the world at the age of seventy-six in 1955. In his own words, he was an artist who enjoyed the freedom of imagination… To be continued