A vagrant in Montreal. Grandpa and me. Podcast serial Episode 35 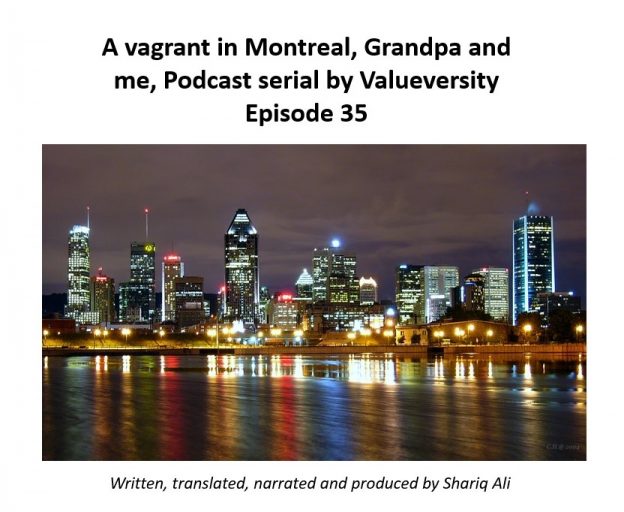 Late night in the cultural capital of Canada where John Lennon wrote his masterpiece “Give Peace a Chance” and Nadia Comaneci won the hearts of so many, here comes a vagrant. Enjoy the story!

Uncle Patel was recounting his trip to Canada. He said. Airport coach stopped at the Chinatown bus stop in the city centre. It was almost midnight. The driver pointed to the neon sign of Travelodge in front and opened the door of the coach. I thanked him and left the coach. Along with a few childhood memories, my feet landed on the city of Montreal. In 1976 Olympics here, Nadia Komanichi won three gold medals and millions of hearts. John Lennon’s wrote his famous song “Give Peace a Chance” in this city. French-speaking Canada’s second-largest city. Where minus twenty-five degrees in winter and two months of snow is normal. Montreal the sister city of Hiroshima. Holding my bag, I entered into the Travel lodge and went to the reception. The young fair-skinned man wearing the suit first tried the French. When he saw me lost, he greeted me in English. When I started filling out the form, he saw my name and revealed that he is a Moroccan and manager here. Then smiled and upgraded my room from standard to Queens suite. He took a map out and showed me the bank, post office, shopping centre and a nearby mosque. Leaving the luggage in the room, I rushed to the dining hall and found the door closed. The reception is also empty. I was starving. I came out and crossed the road. Started walking in pursuit of some lights at the end of the street. Montreal is not only inhabited above the ground. It is also famous for its world’s largest underground system. Twenty miles long underground passages equipped with electricity and air conditioning connects. Various shopping centres, banks, government offices, post offices, universities, flats and metro stations. In the winter, half a million people use the system. On the way, a small restaurant appeared open. I sat at a nearby table after ordering pizza. A six-and-a-half-foot-tall, bald white man with red eyes approached the ear and whispered. Can you get me a pizza, please? I was recovering from the smell of his clothes and alcoholic breaths. A slender four-foot-ten-inch Chinese waitress approached us and shouted with command. How many times I have told you, Peter. Don’t bother my customers. Then she raised her finger towards the door and shouted. Out, I say get out at once. I got terrified. A punch of the vagrant could send Chinese anger to the heavens. The end of her life story. Peter bowed his head and walked out of the restaurant like a child caught during mischief. When I came out of the restaurant, I saw Peter sitting outside the door. He was half asleep in this cold night. The strong winds of compassion began to blow in my heart. Then the thought came to me. If I had taken out a purse to help him, he might stab me to death. Only to disappear in the underground world of Montreal. I dropped the idea and started to take fearful hasty steps towards the Travelodge… To be continued.