A Stranger In SaoPaolo. Grandpa & Me. Podcast Serial Episode 26. 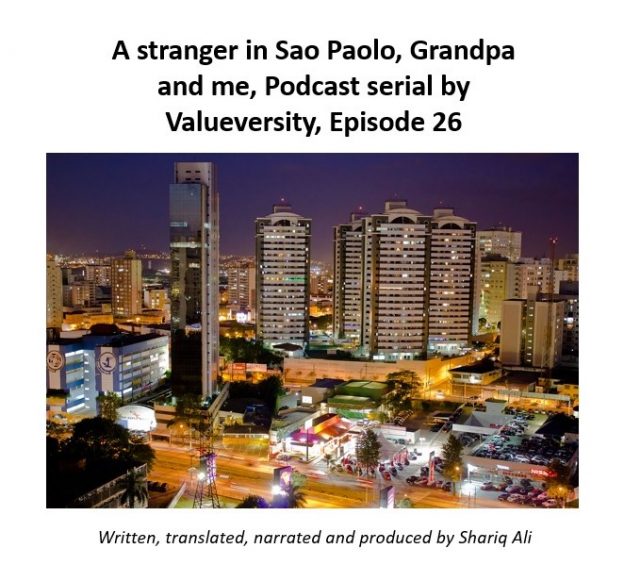 Enjoy the discovery of Brazil with Pedro Alvares Cabral in this story. A country of Amazon river, rainforests and anaconda

Uncle Patel returned from a trip to Brazil last night. At the breakfast table, Grandpa, Yani Apa, and I were all excited to listen to his travelogue. Uncle said. From Dubai to Frankfurt and from there to Fortaleza Via São Paulo. It was twenty-eight hours from home. Finally, our plane managed to land in the misty morning. Fear of hitting Sao Paulo skyline turn out to be an illusion. All the passengers, including me, clapped and gave the pilot respectful applause. I waited for my luggage until the end. With utter disappointment, I finally went to the airline window. First, they apologized that my luggage has missed in Frankfurt. Then they gave me 150 US dollars and a bag as compensation. Fortaleza’s flight was five hours later. I sat on a bench in the waiting lounge and opened the bag. I found a T-shirt, shorts, socks and toiletry kit in the bag. I was about to lie down on the bench putting this bag under my head as a pillow. An old man wearing a long overcoat and an ancient-looking sailors cap came and sat beside me. He said to me. Will you be able to provide a stock of spices for loading on 13 ships? I sat up straight on the bench. The sleep was gone. Without hearing my answer, the stranger said. I am a Portuguese explorer Pedro Álvarez Cabral. My countryman, Vasco de Gama has returned after a successful spice trade trip from India. And now, six months later, I have the command of thirteen ships. My task is to establish Portuguese domination over this trade on the coasts of Asia and Africa. On our way to India, we have hoisted the Portuguese flag here on the fertile soil of South America. The stranger seemed so confident that I did not find it appropriate to refute. I continued the conversation and asked. How did you find this new colony? The stranger replied. Today, on this bright day of the fifteenth century, I can only guess. This will likely be the symbol of Portuguese greatness in coming times. We will get African slaves here to get cotton, tobacco and sugar from fertile land. And take all the goods to Portugal on ships. Then he paused and said to me. And why you are here? I said. There is a lot to explore in this largest country in South America. The main attraction for me is Amazon. The second largest river in the world. Four thousand miles long and fifteen miles wide. And its dense rainforest that produces 20% of the world’s oxygen. The largest gold hoard in the world in eighteenth-century attracted many adventurers. Who knows how many of them have fallen prey to the Anaconda? Oh, you are here Grandpa! I have searched for you all over the airport. The slim girl with the Portuguese imprint said as she joined us in the conversation. Then she turned to me and said. My apologies Gentleman. My grandfather’s memory is correct but a little misplaced in time. …. To be continued