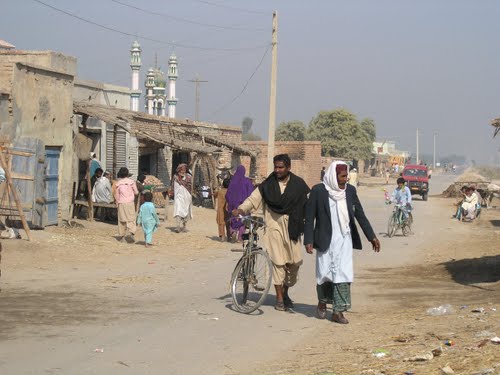 Snake bites are common in the desert of Sindh, Pakistan. Rural social milieu is ruled by the cruelty of feudal lords and old age traditions, customs and superstitions. The fate of an illiterate sindhi woman is a pre-determined process in this social set up. What causes more suffering, snakes or social injustics? This story explores the issue.

She may have been in her twenties, wearing a faded but colourful flowing Sindhi dress. Multitude of white plastic bangles were covering both arms, only exposing the hands and elbows. Her face and body was appearing malnourished. But the smile was broad and indebted. Her story was not uncommon as we were told by her treating doctor. She woke up early morning as usual that day to prepare breakfast for her husband and family. When she put her hand without looking in a large traditional rice storage vessel to grab some rice, a striped black snake, already spending the night there, bit her on her wrist.

Initial pain was excruciating and soon she became drowsy. Her husband with the help of other villagers, after covering a long distance through desert and jungle, finally managed to bring her to this Clinic in Dharki. She was fortunate to be successfully treated by the Ani-Snake Venom (ASV) smuggled from the neighbouring enemy country, India. Now she was one of the proudly presented clinical cases during our visit to this clinic.

It was our first night in Dharki Guest House. The primary purpose of our trauma team, which was comprised of experienced surgeons from Karachi, was to conduct a hands-on trauma workshop next morning for the local doctors in mirpur Mathello, the district headquarters of this region. As we were staying in Dharki Guest House that night, our visit to this clinic was more of a social event than a professional.

We were informed that this Clinic has run a unique facility of treating snake-bite victims since 1977. Their record showed a large number of patients who received treatment in this facility. Incidents of snake bites rises during the rainy season. Floods put the rural population and agricultural workers at risk as well. Being the team leader, my mind was focused more on the next day workshop. We said a few encouraging words to the doctor in charge and decided to go to bed early that night.

Earlier in the same evening, we took a brief PIA flight from Karachi to Sukher and were received at the airport by the driver sent by Engro, our host for the trauma workshop. The van was very comfortable and the driver was keen for conversation. We had an enjoyable drive through a familiar rural landscape of Sindh. We passed through Punu aqil and Ghotki to finally arrive at our accommodation in Dharki. It was a great surprise to find a very posh residential colony for the Engro employees in the middle of nowhere.

Next morning, we reached the course venue in time to find it a deserted place. Even the local district officer and his team, who was supposed to assist us, arrived later than us. They were reversely surprised to see us in time. The life is very laid back in this part of the world. Soon the course commenced and gradually the enthusiasm and the trustworthiness and the ensuing friendship between the instructors and local participants progressed alongside the progress of the workshop. At the end of the day, it turned out to be a successful day as indicated by the evaluation forms filled in by the participants.

Two days later, we were on our way back to Sukker airport. I was sitting beside the window in the van and watching the familiar vast open fields and trees passing by, as they have done untiringly since my childhood. For no reason, the thought of poisonous snakes of Sindh came to my mind. I asked myself “How many innocent victims they can harm in a year? A few hundred, maybe!

I hate snakes and they are obviously not a pleasant creature to think about. But somehow, in that moment and time, they appeared very innocent in my imagination. I started to compare the magnitude of suffering caused by feudal lords which has maintained the social injustice and illiteracy in this part of the world for centuries.

My mind attempted but failed to measure the physical suffering in the form of civic underdevelopment such as scant and faulty water, lack of health care facilities, transportation, meagre educational facilities, absence of Sui-Gas and electricity, inadequate income and unemployment. Furthermore, who can measure the psychological impact of this suffering?

Who can measure the suffering caused by the ongoing rise in poverty and ignorance in this region? Who can quantify the pain emerging from people`s inability to emancipate from the grip of traditions and customs? The pain of sociocultural malaise and the low status of women causing deprivation of love and self-esteem?

It was so painful for me to realise that the self-actualisation needs in Maslow’s Hierarchy of needs is an unthinkable dream in this part of the world. Human rights and principles of a civilised world are not applicable here. Rural social milieu of Sindh is ruled by the cruelty of feudal lords and old age traditions, customs and superstitions. The fate of an illiterate Sindhi woman is a pre-determined process in this social set up. An example of this cruelty is ‘karo kari,  an act of murder due to the belief that the victim has brought dishonour upon the family.

For the beautiful land and people of Sindh, how can we eradicate the snakes of feudalism and Karo Kari? Can education and land reforms be the Anti Snake Venom for the poison of social injustice? Or do we need a revolution?

Valueversity would like to thank and acknowledge the sources on the internet including Mr Sabir Ali Chandio for their kind support for this article with the pictures of rural Sindh.