Beyond Borders, a journey of friendship BW India and Pakistan by Shariq Ali 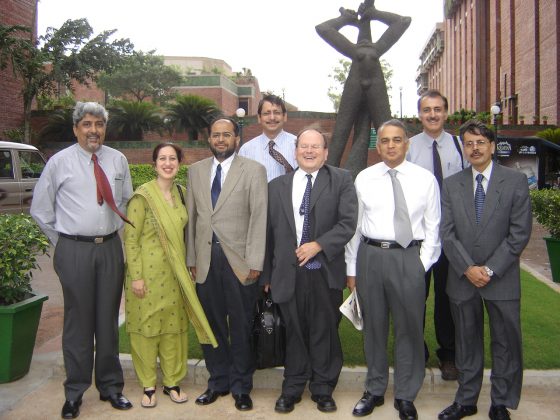 The village was small and the entire community was tied together like a family, with common cultural values and traditions evolved over hundreds, if not thousands of years. They were farmers and knew very well as to how to work in the fields and love and sing together, but had a poor understanding of the political realities of their times.

One day, they saw the sunset as one community but at the dawn, realized that the village is divided by an invisible line created not by Hindus and Muslims, but by few British advisors called Radcliffe commission.  And so was the territory of 88 million people of the subcontinent.

Wahga, a small village on the border of India and Pakistan which was surrounded by the fertile, fearless and undivided lush green fields of Punjab, then became a military border barricade . Wahga is located on the historic Grand Trunk Road which extends from Bangladesh to Kabul and was first built during Mauriya Empire in 3rd century BC. It was then renovated and extended in 16th century AD by Sher Shah Suri.

About sixty years after the sunset of that divide, Me and Saeed, two Pakistanis and John, A British, were standing on the Pakistani side of the border. The sun was about to set.  Our discussion propelled us to go beyond borders with the dream of a new dawn in the region. It made a lot of sense to us as the challenges of poverty, education and healthcare are still the same on each side of the divide. The thought was already in action in the minds of our senior colleagues Dr Rajendra Prasad and Professor Rashid Jooma, the two eminent neurosurgeons from India and Pakistan

Trauma is a major killer of young people in both India and Pakistan . We believed that a common strategy against trauma and the spirit of friendship will let us cross the line of divide easily. John, as the Chairman of IDEALS generously agreed to finance this journey of friendship beyond borders.

Our team consisted of John as the patron, jooma as chairman, myself as Course Director and Saeed, Punjwani, Bushra, Noor and Inam as instructors left Lahore airport on 15th of september, 2005 carrying with us a great sense of friendly excitement and enthusiasm. PIA flight from Lahore to Delhi was a brief and pleasant experience. We hardly finished our discussion over a cup of tea when we were instructed to fasten our seat belts in order to land on Indira Gandhi International airport.

We were received and given a very warm welcome by the host committee.  This busy airport is named after Indra Gandhi, the former Prime Minister of India. Proceedings at the airport were polite and smooth for us. It was my first visit to the country of one billion (one thousand million) people, making it the second most populous country after China. It is more than three times the population of the United States though its area is only about one-third. India is anthropologically a rich country  having 17 major languages and 844 dialects. Excitement was real.  Soon we were in the cars for a sixteen km journey to our accommodation at the Habitat Centre.

Habitat centre is located in the heart of Delhi near Lodhi Gardens. The centre is the brain child of Indra Gandhi and was conceived to offer a physical environment that serve as a catalyst for synergistic relationship between individuals and institutions. Surely it is more than just accommodation within a friendly and relaxed environment.

The next morning was the official opening of our trauma Course and the Chief Minister of Delhi and Pakistani ambassador were invited as the chief guests. It was a foundation course to launch a trauma system in India and was a matter of pride for our team. I was feeling proud as the Course Director to initiate this remarkable step forward in India as a friendly gesture from Pakistan.

The course was held in the famous Appollo hospital of Delhi.  Indraprastha Apollo hospital is a modern and state of the art hospital in Delhi. It is one of a group of 53 hospitals within and outside India, All the course organisers were highly reputed professionals and showed a combination of experience and expertise. During the proceedings of our course, it was clear that the focus is to achieve excellence.

This three-day intensive course resulted in a lifelong friendly relationship between Pakistani and Indian delegates. A committee was selected by the participants for the ongoing continuous effort to improve trauma care all over India.

Evenings of the course gave us a lot of opportunity to enjoy social interactions and to visit various interesting places in Delhi.  Situated on the west bank of Yamuna river which has witnessed its 3000 years history, Delhi is an amalgamation of various cultures, traditions and religions that has painted Delhi in colour which are brought from all over India. Delhi is a true cosmopolitan city always on the move and has no shortage of places to visit. The old city originally had fourteen gates. Five are still standing.  Their names are according to the direction e.g. Ajmeri Gate faces Ajmer in Rajasthan. Lahori Gate faces Lahore as the names suggest and so on and so forth. Our visit to famous Red Fort and the light and music show at night was very enjoyable.

Khari Baoli is the Asia’s largest wholesale spice market in Delhi. We wanted to have once-in-a-lifetime overdose of a spice cocktail high but unfortunately constraints of time did not permit us to do so. We managed to see Chandni chowk, another famous market place in old Delhi, designed by the daughter of Shah Jahan, Jahan Ara Begum. Although there are no more canals to enjoy the moonlight shadows, the market was historically famous for, but it is still well reputed for its delicious eating places such as Huldi Ram for vegetarian food and Karim`s for traditional mughalai cuisine. Huldi Ram is no doubt matchless in eastern deserts ( Mithai) e.g. Sohan Pepdi and Karim is a master chef in Mughalai dishes.

I found a lot of similarities between Delhi and Lahore. I am not only talking about the climate and landscape but also the habits of common people. For example, just like Lahore every Delhite is ever ready to help you out with directions. They will direct you even when they do not know what you are talking about. It made many short cuts, a very long cut for us. Tour to Delhi cannot be complete without paying visit to Nizamuddin Aulia and  on the way visiting and remembering Ghalib. The door going towards Ghalib tomb was locked and just managed to have a glimpse through the closed-door

Delhi Jama Masjid is very similar but more spacious than Lahore mosque. It is apparent that the design and architecture has a mughal traditional following. It is the main Jamia mosque of old Delhi and was commissioned and completed in the year 1658 AD by Shah Jahan,  It lies at the origin of a very busy central street of old Delhi, the Chawri Bazar Road

Our visit was a very small gesture of a tremendous underlying desire in the hearts of the common people on both sides of the divide to come forward and join hands in order to meet the real challenges of poverty, education and healthcare together.