Baghdad, a city still in waiting— 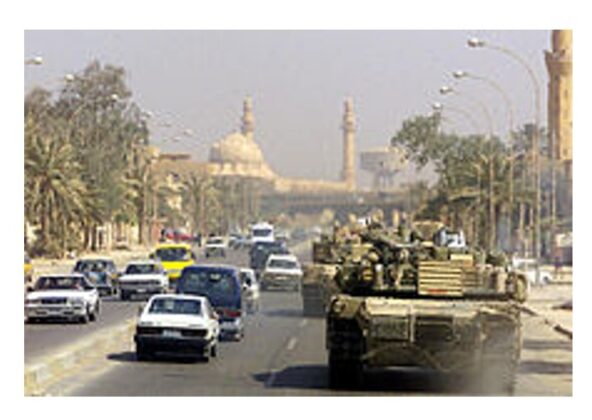 Come out of your vehicles, keep all the doors and boot open and stand away on this marked white line…

His voice was a good match with his harsh American accent and stockily built. It seemed that the sole purpose of his existence was to shout and give commands to others. He and an Iraqi soldier (speaking in fluent Arabic) were the only two talking but the rest, about a dozen of them heavily armed with automatic weapons wearing US and Iraqi army uniforms, were standing outside their sandbag protected check post. Their expressionless faces and eyes were searching us carefully even from the distance.

About thirty civilians including three of us did exactly what we were told to do. We patiently stood in a line approximately twenty-five yards away from our vehicles.

It was a very warm and sunny day of April 2010 in the outskirts of Baghdad and we were on our way to Airport after a six-day memorable stay at Al Rasheed Hotel, located in the heart of Baghdad green zone.

Alongside us were standing an Iraqi family of five. The girl was around 14 years old and two boys of about 10 and 6. The older boy had a noticeable burned left-sided face. His scars were reaching to the socket of his lost left eye. His younger brother was visibly limping with his grossly deformed lower limb during his effort to walk towards the white line.  Their parents and little girl were bodily intact but with many untold stories in their sad eyes.

Within a minute or so, an armed car came and stopped alongside our vehicles and four soldiers, again heavily armed and with leashes in their hands of restless and aggressive looking trained dogs searched and sniffed every bit of our vehicle in and out and upside down. We were then given clearance and allowed to go ahead. We met similar tight security on our arrival in Baghdad. We had to pass through nine check posts and came across multiple physical checks similar to this.

Our International team of trauma surgeons went to Baghdad on the request of the Iraqi health ministry to train the selected bunch of doctors from Baghdad and Basra teaching hospitals. The aim was to teach them the medical management of severely injured patients.

When I conducted the briefing as the Course Director at the end of the first day of our course, all the instructors were in agreement that the participating Iraqi doctors already had a vast experience of managing war trauma because of the long-standing Iran Iraq war and US-led invasion of Iraq in 2003. We then decided to have less emphasis on the practical medical management aspects of severely injured patients and mainly focus on teaching them the principles of organising trauma care in Iraq.

The enthusiasm of Iraqi doctors to learn and participate was remarkable. We found them and the Iraqi people in general, extremely intelligent and courteous. The hospitality and food was of excellent quality. During these six days, we were strictly kept confined to the green zone and it was impossible to dine out on the streets of Baghdad and to have the real taste of Iraqi street food or to intermingle with an ordinary day to day life events.

Even inside the premises of Al Rasheed Hotel, it was a frequent sight to see heavily armed bodyguards shadowing various high officials in civilian suits. A constant reminder of political turmoil and foreign occupation.

My habit of an evening walk took me to the garden of our hotel more than once in the late evening. Every time it attracted the attention of armed security guards and they silently came close to observe me although did not verbally say anything or restrict me in any way. One could easily feel the tension.

From the window of my deluxe room located on the 9th floor, the central Baghdad downtown and its streets have always seemed to be in the grip of fear and unease. Armed vehicles, firing positions on the high rise buildings and very modest traffic on the roads with frequent concrete barricades and armed check posts was not a relaxed and happy sight.

In my imagination, I tried to search for the Baghdad of 8th century on the banks of river Tigris which remained the largest city of the world throughout the high middle ages with an estimated population of 1,20,000.

Abbasids caliph Al Mansur was in love with this place because of its abundant water supply from Tigris on both the north and south end of the planned city. Mansur assembled engineers, surveyors and art constructionists from around the world to come together and draw up plans for the city. The bricks used to make the city were 18 inches on all four sides. Imam Abu Hanifa was the counter of the bricks and was supervising construction. The city was designed as a circle about 2-kilo meter in diameter, leading it to be known as “Round City”. A city is full of parks, gardens, villas, mosques and promenades.

What I saw from my room window was more of a reminder of the year 1258 when the city was largely destroyed at the hands of the Mongol Empire. It seems the suffering is lingering on. Baghdad has faced severe infrastructural damage due to the US-led invasion in 2003 and the subsequent state of war still ongoing in the form of insurgency activities and terrorist attacks

During our evening sit down meals with our Iraqi organisers and course participants, we were told many tragic and sad stories of atrocities of the pre and post-Saddam era.

It seems Baghdad is still in waiting for the long-awaited sanity and justice!